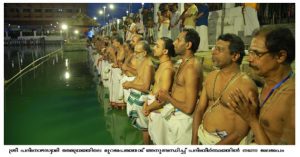 Murajapam is conducted by around 200 Vedic scholars from various parts of the country, especially from southern states. Eminent priests from Kanchipuram, Sringeri, Penjawar, Brahmana Sabha, Yogashema Sabha and other Vedic schools in the country have arrived at the temple to participate in the rituals. Head priest Tharanallur Parameswaran Namboothiripad would lead the murajapam festivities.

One of the wealthiest temples in the world, Sree Padnamanabhaswamy temple hosts the Murajapam (Vedic Chanting) rituals once every six years. The ceremony was initiated by Anizham Thirunal Marthanda Varma, the 18th-century king who is known as the maker of modern Travancore. King Marthanda Varma introduced Murajapam as a state ceremony for the overall well-being of the people and the prosperity of his kingdom.

Along with Vedic Mantras, the priests also chant various other Manthras including Sri Vishnu Sahasranaamam and perform ‘Jalajapam’. While Vedic chanting and Mantra chanting (such as Bhagya suktam) are performed on the specially decorated Mandapams inside the temple between 6 am and 9.30 am, Sri Vishnu Sahasranama Japam is carried out between 2 pm and 3 pm.

After the evening puja in the temple, around 6.30 pm, the priests stand knee-deep in water on the steps on all four sides of the “Padma Teertham” (the sacred pond adjoining the temple) and chant 108 times a particular Rik from the Rig Veda, for the destruction of enemies of the country. During the three significant rituals (Veda Japam, Sahasranama Japam and Jala Japam) the Maharaja of Travancore graces the occasion. Brahmashri Tharanallur Parameswaran Namboothiripad led the Jalajapam on the first day of Murajapam.

Shankara Narayana, a scholar from Karnataka, said “The Rigveda, Yajurveda and the Samaveda are chanted for the welfare and the prosperity of the nation. Vedas are considered as god’s breath and it is a blessing to come here and chant in the presence of Sree Padmanabhaswamy.”

“The main concept of Vedic chanting is ‘Loka Samastha Sukhino Bhavanthu’, which means ‘May peace and happiness prevail overall,'” Sreekrishna Shabaraya, another Vedic scholar said. The rituals will conclude in January 2020.