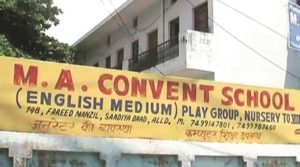 Kashi. When everyone is proudly echoing “Nation First”, a Muslim school manager in Allahabad differs by saying “Religion First”, and terms national anthem as un-Islamic quoting the line ‘Bharat bhagya vidhata’ is against Islam as Allah is our bhagya vidhata not the nation.

Mohammad Zia-ul Haq, a school Manager of M A Convent School in Sadiyabad, Allahabad district issued orders barring students from singing national anthem, Vande Mataram or Saraswati Vandana. The principal, who joined the school just over a year ago, was shocked to know such kind of orders and in protest of this, she immediately tendered her resignation along with seven other teachers.

The principal said 330 students, in which 300 are Hindu and remaining 30 are Muslims. She is planning to go for legal action against the school manager in this regard.

The school manager, Mohammad Zia-ul Haq, trying to justify barring of national anthem, said some of the Muslim parents have objections on it and it was also a practice of the school ever since it was set up.

Moreover, Mohammad Zia-ul Haq was citing Supreme Court orders that say one cannot force anyone to do anything which is against religion.

He further said, “In the national anthem, the country has been described as being bigger and more important than mazhab (religion) and khuda (god), which is unacceptable for any true Muslim,”

“The national anthem has never been sung on the school campus, and cannot be allowed as it is un-Islamic. I run a school and have to abide by the parents. The teachers left the job as they had some other issues with the management,” claimed Haq.

In the midst of this, the Allahabad District Magistrate Sanjay Kumar said the school, which is till Class VIII, is not recognised and he is likely to take strict action against the school management after listening to them before taking next course of action.

In 2014, a Muslim school head master in Khammam district of Telangana also denied to salute to national flag on Independence day citing it is Un-Islamic. 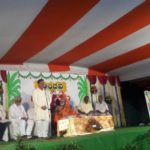