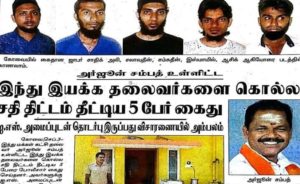 In Tamil Nadu, police have arrested five Muslim youths for conspiracy to eliminate leaders of Hindu outfits in Coimbatore. Acting on a tip-off, the Special Investigation Unit (SIU) of the police has detained four people who arrived here from Chennai on September 1.

The Coimbatore police on September 3 said they had arrested five youths under the Unlawful Activities (Prevention) Act (UAPA) for an alleged conspiracy to kill leaders of two Hindu fringe groups in Tamil Nadu. According to a statement from Police, the operation involving a search near the station, the arrests, seizure of cell phones and five sickles, and filing of an FIR — took about six hours on 1st September

We received information that Ashiq (25) from Coimbatore, and his friends, who were arriving from Chennai, were plotting to target Hindu Makkal Katchi leaders and Sakthi Sena leader Anbu Mari. All the five of them were picked up from a road near the station. Besides Ashiq, Ismail (25) from Tindivanam, Salavuddin (25) from Otteri,( Chennai) Jafar Sadiq Ali (29) from Vyasarpadi near Chennai and Shamsuddin (20) from Pallavaram in Chennai were held. They have been remanded to Coimbatore central prison. The arrested five were “active in defending radical Islam and posted on social media against those who criticise Islam and Prophet”. All of them hail from lower-middle-class backgrounds. Except for Ashiq, none had a permanent job. Quoting Ismail’s alleged confession, the statement said Ashiq had promised them help from more people for their “operation” and that Ismail had links with the Islamic State. The accused are members of the Indian National League (INL) — an outfit found ten years ago with the objective of preventing Muslim youths from joining radical groups and they also supported Islamic State’s ideology. They planned to carry out the plan during the Ganesh Chaturthi celebrations.

The arrests are also significant given the two murders in Coimbatore — that of Hindu Munnani spokesperson C Sasikumar in 2016 and of atheist H Farook in 2017. The role of radical Muslim groups is suspected in both cases, and the NIA is probing the same. Ashiq, who worked at a mutton shop, have been kept under watch for over six months since he was linked to a case under the POCSO Act for allegedly abusing school children. Among the five, d, two had completed their Bachelor’s degree, one had a diploma in a technical course, and others had completed school. The conspiracy was unearthed after closely following their social media activities, the release said.

However, relatives and acquaintances of those arrested denied they had gone from Chennai to Coimbatore to look for footpath space to sell clothes ahead of the festive season. It is to be noted that one of the arrested, was seen with an Obama bin Laden poster in his hand and his two-wheeler during the infamous Marina Jallikattu protest in 2017. INL founder Tada J Abdul Rahim said Salavuddin and Ali were active in his movement till five months ago. In a statement, Rahim said the youths were picked up when they had gathered in Coimbatore to look for footpath space to sell clothes. “Taking them into custody, linking them in a murder conspiracy and foisting charges such as UAPA is a conspiracy against Muslim youth, they should be immediately released,” he urged. Rahim’s INL has made arrangements for advocates for the arrested youths. Meanwhile, Security to the leaders of the Hindu Munnani, Sakthi Sena and allied outfits has been beefed up. 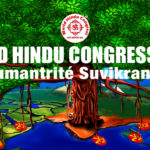 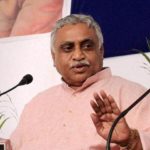