Agra. Some muslims in Agra converted their religion and accepted Hinduism. The special feature of these people is that according to their surname, they have kept their titles such as Solanki, Tyagi and Chauhan, the same as those of Hindus paraphrasing their descent from Hindu forefathers. It is therefore not wrong to claim their Hindu ancestry, and underlying the not forceful conversion of Muslims into Hindus. BJP MP Yogi Adityanath rightfully called this the joyous occasion of ‘home coming’. This event is an echo of the age-old idiom of someone lost in the morning returning back in the evening. The participant Muslims are firm in their option that this event would help them become the part of our Bharatiya culture, the way they were originally before their prior forceful conversion to Islam.

It is also imperative to recall on this occasion the dates of 14 October, 1956 when lakhs of Hindu Dalits were converted into Buddhists and 19 February, 1981 when 280 Hindu families were converted to Islam at Meekshipuram of Kanniyakumari District of Tamil Nadu.

It is indeed a much lamented part of our Hindu culture, that inspire of bearing Hindu surnames, living in Hindusthan, our fellow countrymen on account of forceful conversion of their forefathers centuries past have become strangers to us.

Nevertheless, it is heartening to know that in Vednagar, Devri Road Sadar district, Agra, the situation is normal and police is at alert. The police is taking all preventive measures to keep the city peaceful.

not forceful conversion of Muslims 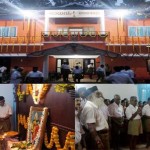