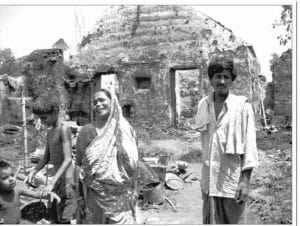 If someone asks how many dictators lived in this world, Hitler would be the first name that would strike your mind. Followed by Stalin, Lenin, Fidel Castro. But some people would like to debate on these names. Numbers of people who consider them as revolutionary leaders are not less. Dictating their terms in the name of revolution Lenin, Stalin, Castro and Mao are idealized by some Indians. Just like dictators whenever one talks about the massacres in the world, the assassination of Jews is always remembered. But no one remembers the monstrous act of killing in the name of communist revolution. In India, some intellectuals talk about mob lynching but there are some incidences which are never discussed.

One such incident is the┬Āmassacre of Nanoor. From Kashmir to Bastar every killing is talked about but no one talks about the mass killing of Nanoor. Let us look at the story behind this.

In 2000,┬ĀBirbhum┬Ādistrict in West Bengal was considered as the centre of the Marxist Communist Party. Nanoor is a small village here, where┬ĀSC/ST and people from Muslim community resided. Here eleven┬Ā(11)┬Āpeople were killed. This was not a murder but a ghastly massacre that the communist has inherited from their leaders.

The reason behind the slaughter of these 11 people was┬ĀŌĆ£difference of opinionŌĆØ. Just to keep a different point of view from the communist party these extremely poor villagers were killed by the communist leaders and the officers.

The communist party leaders in power refused to agree and accept this as a massacre. The villagers killed were termed as ŌĆśdacoitsŌĆÖ and an unsuccessful attempt was made to confuse the citizens.

But after some reports, the Communist Party ( Marxist) had to agree that it was a slaughter of poor landless farmers. Somnath Chatterjee, the MP from Nanoor stated,┬ĀŌĆ£the people killed were┬Āhired goons and anti-socialŌĆØ.

The Communist Party tried their level best to suppress the matter. Their plan was such that the news should not reach the media. CPI leader Jyoti Basu also tried to normalize this incident. He said,ŌĆØ Many communist party leaders have been killed before. These leaders have full rights for self-defense.ŌĆØBy saying this he was trying to cover the inhuman act of communist leaders.

Several tireless attempts were made to protect the communist leaders involved in this incident. So called liberal and democratic society ignored this incident as if nothing had happened.

On 12th┬ĀMay 2005, the main witness Abdul Khalik and his security guard Jahangir Alam faced a deadly attack. 4 people were arrested for this attack.

One National newspaper written in its editorial┬Āthat ŌĆ£the motive behind the attack was to save the accused of July 2000 Nanoor massacre from punishment. But the irony of the situation was that even after five years of incident no trial took place on the charged comrades.ŌĆØ

When the trial on this incident started the communist workers and leaders created a fearful atmosphere in Nanoor by influencing witnesses and threatening villagers in dangerous ways.

The charge sheet accused total 82 people for this massacre. 10 accused were killed in the course of trial of ten years. Also, the police was unsuccessful in arresting 5 accused communist workers. In 2010, lifetime imprisonment was given to 44 accuse.

The so called liberalist and reformists philosophers create a hallucination that fascists are still in power.

But the local people must understand a fact that the game played by communist leaders along with the media moguls are clearly seen and understood by the common people.