Bengaluru. If you are an avid newspaper reader you would have had a situation in life waiting for the newspaper distribution boy to deliver the day’s newspaper. It’s already 6.30am. The fresh Chikamagaluru coffee is brewing at the kitchen but you have the determination of not sipping the coffee without the newspaper in your hand. You might have watched the news debates in TV channels till late night, browsed over social media for news, but the newspaper has always become a key element to your coffee and for the day being more cheerful.

Of course, we would have scolded the news paper boy for delivering late but often forget to thank him for he would have many a times dropped the newspaper at home much before you would have got up from bed.

Today is the day. Thank them! September 4 of every year is celebrated as NATIONAL NEWSPAPER CARRIER DAY. There are tens of thousands of such distributors who set off from home in the morning to gather at a place-arrange the newspapers and plan meticulously for the distribution. Some are on their mopeds while most on their bicycles. The passion they possess to make our mornings better is to be valued more. Their essence of Karmayoga of waking up way early in the morning on a daily basis without taking a weekly break is commendable. While many may opine paper distributors get into the profession for the poverty they are going through, there are certainly many other professions to evade poverty, one need not get up at 4:30 am in the morning.

Vishwa Samvada Kendra (VSK) as a media centre works with the media of all kinds and one of the VSK’s in Bharat had felicitated a newspaper distributor during the Narada Jayanti (an event to remember the pioneer journalist Maharshi Narada). The distributor had not taken off from work for more than a decade. His dedication to work and his devotion of delivery of newspapers to not stop was recognised by the VSK.

RSS Swayamsevaks have also in the past worked with the news paper carrier boys. They have celebrated Raksha Bandhan with those boys and distributors sending out a message of gratitude as well as expressing to protect them to eventually protect Bharat. The Swayamsevaks also on the day of Sankranti had been to the distribution corners to share the traditional ellu-bella with the paper boys.

There are instances of such dedicated carrier boys who have come a long way in their personal career too. There are inspiring stories of such carriers growing as distributors, starting an agency and employing more boys with them. The leaves these boys have are those 5-6 days when the news papers are not printed.

Even during the times of Covid and the rumours of Covid19 spread, the news papers boys silently did their work and there was not a day complained of the newspaper not delivered at home. They are certainly to be congratulated for the feat.

Despite being in the era of digital communication with e-papers making the mark the paper carrier business and reading of physical newspapers would never diminish believe many in the media. 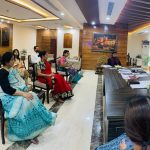