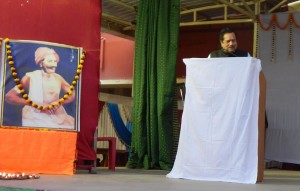 Bhubaneswar. “Netaji Subash was the first chief of independent Bharat which was accepted by Japan, Germany, Russia and other 10 countries. He was also the first chief of independent Bhartiya army” Shri Indresh Kumar, National executive member of Rashtriya Swayamsevak Sangh opined at the closing ceremony of Rashtriya Swayamsevak Sangh Youth convention here on January 23, birth day of Netaji.

Bharatiya politics would have been different,had he been present for the past 60 years. Knowingly, life history of Netaji’s, Veer Surendra Sai’s, Swami  Vivekananda’s  were kept in dark. In the coming 2 years,efforts would be made to bring the life history of these freedom fighters before the nation, he said.

Chief Guest, Colonel (Retd.) Himansu Sekhar Mohapatra suggested that the activities of youth should be of national centric. Families of three martyrs were also honoured on this occasion.

The massive youth convention organised by Rashtriya Swayamsevak Sangh was inaugurated by Kshyatriya pracharak Advaita Dutta. Shri Dutta inspired youths of society to love their country with nationalistic approach. It is the need of the hour, he stressed. Work for the nation untidily and with devotion is a master key for all the problems, he added. Shri Samir Kumar Mohanty,Sahapranta Sanghachalak,Utkalpranta and Dr.Basanta kumar Pati,Sanghachalak of Bhubaneswar mahanagar were present on this occasion.

More than 1500 youths, aged between 15 to 35 years participated in this convention.  The convention was followed by an act, patriotic songs, speech and debates based on the life of Netaji and Veer Surendra Sai with Paika akhada demonstrated by  Malud’s Jay Hanuman Paika akhada team. Indreshji also answered the questions raised by the participants of the covention. 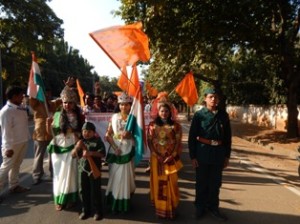 In the afternoon, a massive rally was organised which had covered important places of the town with photos of Netaji’s, Veer Surendra Sai’s and Bharatmata’s.The entire place were echoed by slogans Bharat mata ki jay, Vande Mataram, Jay hind. Participants was carrying saffron flags in their hands. 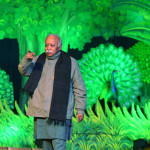