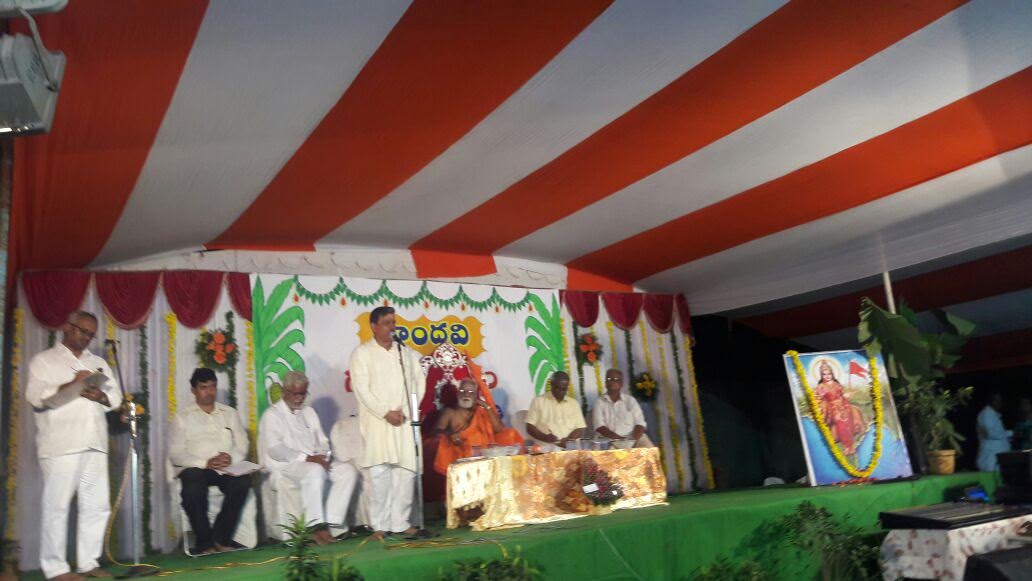 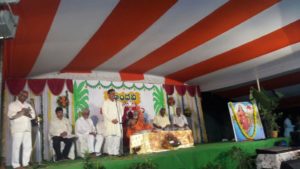 Vijayawada, Andhra Pradesh (VSK). RSS Sahsarkaryawah Dattatreya Hosbale Ji asserted that the Hindu Dharma has no room for the notion of untouchability. The Vedas, the Upanishads, the Shastras all proclaim in one voice, that all existence is covered and encompassed by the divine. The rich, the poor alike are made of the same divine substance. He was the main speaker at the “Griha Pravesham” (inaugural function) of the karyalaya (Office building), “Haindavi” in Vijayawada, Andhra Pradesh, under the aegis of Jana Sankshema Samiti. It was built by swayamsevaks of the Rashtriya Swayamsevak Sangh. The inaugural function was held on 4th of August 2016 at 6:00 PM.

Sahsarkaryawah Ji also asserted that the Hindu dharma does not have any space for distinctions by wealth, social status, or by any other cause. However our society had for many years carried the burden of such evil. Big sections of the society have been oppressed under innumerable social handicaps, and it is the greatest and highest priority of our age to correct these wrongs. Swami Vivekananda proclaims that renunciation and service are an indivisible as whole, these cannot be separated from one another. Service and sacrifice are part of the Hindu spiritual and cultural legacies. They are part of our blood. Our society is immortal and eternal because of the constant stream of sacrifices by the most enlightened beings of our society. 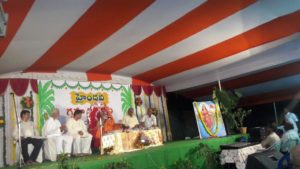 Bahubali, the great sage is adored for his exemplary service and sacrifice for so many ages after his lifetime. He is honoured by a setting up a 56 feet statue in Karnataka. Siddhartha was a prince born with great privilege. And yet he sacrificed all and became Gautama Buddha. Thousands of years later, he is worshipped across the land. These are few examples of the great spirit of sacrifice in our land. The glory and greatness of a family does not lie in the multiplication of the tribe but in ennobling the society by establishing and spreading Dharma and sanskriti. Our family system is the source of the stability of our national life.

Dattatreya Hosbale Ji recalled his experiences from attending the Hindu Swayamsevak Sangh’s 50th annual function recently held in England, where 300 volunteers both boys and girls between the ages of 15 to 20, from 100 shakhas attended this function. These young volunteers were proud of their Hindu heritage and they explained that Hindutva is not just a religion or a system of faith, but an entire system of life and a civilizational culture without parallel in human experience. This is a most accurate description of Hindutva.

On the 21st of June, the entire world observed the International yoga day. Yoga is a great blessing conferred upon human kind by the Rishis of the Bharat varsha. Many more blessings have poured forth upon the planet from Bharat by these Rishis. The family system, the deep sympathy for life and environment, the recognition of the divine in both the animate and inanimate are few of our contributions to the world. There is much bloodshed in the world due to the intense parochialism of the exclusive claim to truth and God. There is an ever multiplying multitude of groups that proclaim violence as a value in itself. Humanity is being crushed under such madness. 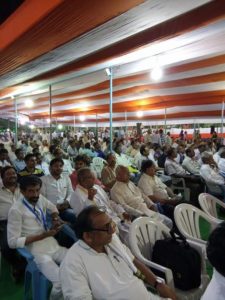 We worship the woman as Saraswati, Durga and Lakshmi, and yet women in India are being increasingly subject to violence and oppression. Women are being reduced to objects of pleasure and exploitation. Today, there are many villages in our country where even water and the graveyard are divided. The temples are closed (to certain jatis), and many villages where untouchability is still practiced. And society is divided along many lines. God dwells not only the comfortable surroundings of wealth but also in the hearts and hearths of the poor. The Hindu Dharma aspires that all beings must attain to the greatest well being. The Hindu dharma has reconciled every reality of life and every theory of the intellect. Only such a system can be eternal. This our sages proclaim.

The RSS has been a great people’s movement over the past 90 years. In this, the RSS is producing workers of tremendous competence and deep integrity. The objective of the RSS is the reconstruction of the nation. The RSS neither desires nor demands any privileges for itself. The RSS spreads on open grounds. But there are certain activities such as those conducted by the Janasankshema Samiti and Seva Bharati that require some minimal resources and so buildings such as this are built.

A book and a DVD both titled “Bharat Darshan” were released. “Haindavi” will stand as a lighthouse and refuge for many programs and activities. Our activities and our sangh will spread far and glorious just as we have made this wonderful and inspiring building. The head of the Bhuvaneswari Peetha and the Kuratala Peetha Sri Sri Sri Siddheswarananda Bharati Swami proclaimed the Vedic mantras blessing the inauguration. Bharata Mata was worshipped with garlands and Swami Ji also offered his comments. He spoke extensively about the national spirit of sacrifice and service. The head of the Kanchi Kamakoti Peetha, the Shankaracharya, Sri Sri Sri Jayendra Saraswati also proclaimed his blessings.