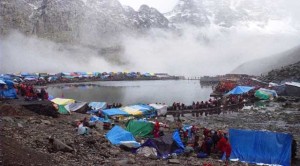 Chamba. Over 600,000 devotees took part in the 17-day annual pilgrimage to the Manimahesh lake located at an altitude of 13,500 feet in Himachal Pradesh, an official said.

The pilgrimage ended on Tuesday on Radhashtami (the birth of Lord Krishna’s companion Radha) amid chanting of religious hymns at the lake.

Every year, people trek to the oval-shaped glacier-fed lake located in Bharmour Valley in Chamba district to take a dip in it and catch a glimpse of Mount Kailash, believed to be the abode of Lord Shiva.

Officials said the annual “Chhari Yatra” or the procession of Lord Shiva’s mace, which started from the 1,000-year-old Lakshmi Narayan temple here to the Manimahesh lake, reached the lake Sep 2.

During the pilgrimage, six people died due to medical reasons and accidents. The journey on foot starts from Hadsar, 65 km from Chamba town and some 450 km from state capital Shimla, at a height of 6,000 feet and concludes at 13,500 feet at the lake.

The pilgrimage is considered as arduous a trek as the one to the Amarnath cave shrine in Jammu and Kashmir.