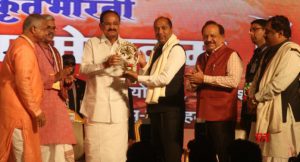 Vice President M. Venkaiah Naidu has said that passionate efforts should be made to conserve, spread awareness and promote the knowledge available in Sanskrit. Addressing the Sanskrit Vishwa Sammelan in New Delhi on Sunday, he said, Sanskrit is an ancient language but it is relevant and useful in modern times. He said, Sanskrit connects India and most of the Indian languages originate from it. Sanskrit words are found in every Indian language.

Speaking in Sanskrit, the Vice President said, various ancient literature related to mathematics, astronomy, science, arts, music and dance are available in Sanskrit. He stressed that everyone should utilize the knowledge available in this language. He appealed to every institution in the country to make an effort to spread Sanskrit and popularize it among the young generation.

Speaking at the event, Health and Family Welfare Minister Dr. Harsh Vardhan said, Sanskrit is a symbol of national unity and it connects everyone. He said Sanskrit lovers from 21 countries are participating in this mega event. He said one crore people have learnt this language in India and one crore people across the world are learning it.