Kerala (VSK). NIA reports to Kerala State Police Chief (SPC) states that 873 policemen of Kerala Police have Popular Front of India links. The report has been handed over to SPC. The suspected are under the observation of NIA. Civil Policemen, Sub Inspectors, Station House Officers (SHO) are in this list. Now, the central agencies are checking and collecting the details of their financial transactions. Top officers and police men working for Kerala Police’s Special Branch, Intelligence and Law & Order are the men under central agencies’ scanner. They are alleged to have leaked the movements, checking and raids of the police to PFI.

In February 2022, a civil officer of Karumannur Police Station in Thodupuzha region (Idukki district), was dismissed from the service for leaking details of RSS leaders and workers to the leaders of PFI. Three policemen, including an Additional Sub Inspector (ASI) in Moonnar, were transferred from there for the same offence. 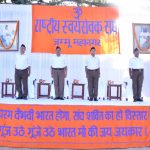