Rajeev had supplied confidential and sensitive information to Chinese officers

New Delhi. Enforcement Directorate has attached assets worth Rs. 48.21 lakhs belonging to Rajeev Sharma, journalist under PMLA, 2002 in connection with a money laundering investigation. The attached asset is the residential property in the name of Rajeev Sharma at Pitampura, New Delhi.

ED initiated money laundering investigation on the basis of the FIR and charge sheet filed by Delhi Police against Rajeev Sharma under the provisions of the IPC, 1860 and the Official Secrets Act, 1923.

Investigation under PMLA revealed that Rajeev Sharma had supplied confidential and sensitive information to Chinese Intelligence officers, in exchange for remuneration thereby compromising the security and national interests of the country.

During investigation it was revealed that such remuneration to Rajeev Sharma was being provided by a Mahipalpur based shell company that was run by Chinese nationals namely Zhang Cheng@Suraj, Zhang Lixia @Usha and Qing Shi along with a Nepali national Sher Singh@ Raj Bohara. This Chinese company was acting as a conduit for the Chinese Intelligence agencies to provide remuneration for persons like Rajeev Sharma indulged in criminal activities.

The remuneration was being paid in cash through carriers as well as through cash deposits. Rajeev Sharma also received money using the bank account of his friend in order to conceal his involvement in criminal activities. In addition to obtaining remunerations in cash, he also received remuneration in kind in the form of various paid foreign trips which were arranged by the Chinese Intelligence Agents.

ED has earlier filed a prosecution complaint in the present case before the PMLA Court, Patiala House Courts New Delhi on which the Court has taken cognizance of the matter vide order dated 07.09.2021. 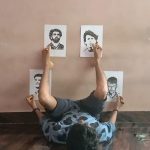