Activists taken to temple as transgenders, dressed up in male costumes, stayed at guest house as IG’s guests.

Kerala. The police drama behind the breach of rituals has been revealed. Police had taken these women as transgenders wearing male costumes. The two activists stayed as IG’s guests in the Guest House.

Bindu and Kanakadurga changed their costumes near Aravana plant. They were given shelter in the party village of Kannur after their failed attempt to breach rituals last time. MV Jayarajan and Dinesh Puthalath were behind these operations for CM Pinarayi Vijayan.

Maoists Bindu and Kanakadurga were given tight security from the police from Pampa itself to Sannidhanam. Centuries old rituals were breached with the strong support and plan of the police. Five DySPs and sixty five cops were in the team to help these women activists.

Cops reached Sannidhanam in mufti, as devotees. Police followed the suggestions of CM Pinarayi Vijayan. Took visuals in mobile phones. Ambulance was arranged for the women to and from Sannidhanam.

As soon as the news of violation of tradition broke, protests spread throughout the state. Peaceful protests are spearheaded by BJP, VHP and Sabarimala Karma Samithi are attacked by police and CPM goons. Several BJP – Yuva Morcha workers are hospitalised. In Tiruvananthapuram, CPM wokers pelted BJP workers with stones and sticks when BJP workers carried out protest march near secretariat. But, police blasted grenades and tear gas and used water cannon against BJP workers. One shell fell in the satyagraha pandal where BJP state vice president Sivarajan has neen observing hunger strike since the last four days in connection with Sabarimala issue. Now, Sivarajan suffers breathing problem due to the fume of the tear gas. Mahila Morcha state president Prof. V.T. Rema and BJP state general secretary Shobha Surendran were there. Prof. Rema sustained injuries in her leg.

In Neyyattinkara, a municipality in Thiruvananthapuram district, BJP workers block the road. They threaten, they would commit suicide in the event of an arrest. In Guruvayoor, Thrissur district, several BJP workers are injured due to the attack of the CPM men. Police atrocities are reported from all districts in the state. 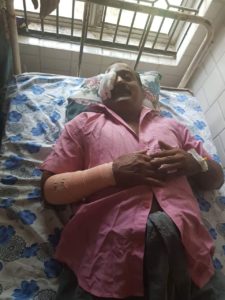 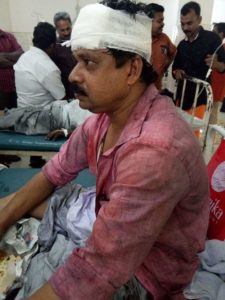 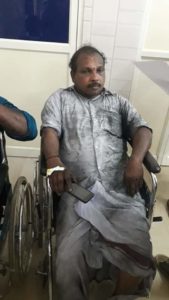