Neem Karoli Baba or Neeb Karori Baba died September 10, 1973, in Vrindavan, India, also known to followers as Maharaj-ji, was a Hindu guru and devotee of the Hindu deity Hanuman. He is known outside Bharat for being the guru of a number of Americans who travelled to Bharat in the 1960s and 1970s, the most well-known being the spiritual teachers Ram Dass and Bhagavan Das, and the musicians Krishna Das and Jai Uttal. His ashrams are in Kainchi, Vrindavan, Rishikesh, Shimla, Bhumiadhar, Hanuman Gadi, Lucknow, Delhi in Bharat and in Taos, New Mexico, USA.

The exact details of Neem Karoli Baba’s birth and early years are not known.

Neem Karoli Baba left his home around the time when his youngest child (daughter) was eleven (1958) and wandered extensively throughout northern Bharat as a sadhu. During this time he was known under many names including Lakshman Das, Handi Wallah Baba, and Tikonia Walla Baba. When he did tapasya and sadhana at Bavania in Gujarat, he was known as Tallaiya Baba. In Vrindavan, local inhabitants addressed him by the name of Chamatkari Baba (Miracle Baba).

He was a lifelong adept of bhakti yoga, and encouraged service to others (seva) as the highest form of unconditional devotion to God. In the book Miracle of Love, compiled by Ram Dass, a devotee named Anjani shares the following account:

There can be no biography of him. Facts are few, stories many. He seems to have been known by different names in many parts of Bharat, appearing and disappearing through the years. His non-Indian devotees of recent years knew him as Neem Karoli Baba, but mostly as “Maharajji” – a nickname so commonplace in Bharat that one can often hear a tea vendor addressed thus. Just as he said, he was “nobody”. He gave no discourses; the briefest, simplest stories were his teachings. Usually he sat or lay on a wooden bench wrapped in a plaid blanket while a few devotees sat around him. Visitors came and went; they were given food, a few words, a nod, a pat on the head or back, and they were sent away. There was gossip and laughter for he loved to joke. Orders for running the ashram were given, usually in a piercing yell across the compound. Sometimes he sat in silence, absorbed in another world to which we could not follow, but bliss and peace poured down on us. Who he was no more than the experience of him, the nectar of his presence, the totality of his absence…

Neem Karoli Baba died on September 10th, 1973 in a hospital at Vrindavan, (U.P.) after slipping into a diabetic coma. He had been returning by night train to Kainchi from Agra where he had visited a heart specialist due to experiencing pains in his chest. He and his travelling companions had disembarked at Mathura railway station where he began convulsing and requested being taken to Vrindavan.

They took him to the emergency room at the hospital. In the hospital the doctor gave him injections and placed an oxygen mask over his face. The hospital staff said that he was in a diabetic coma but that his pulse was fine. Maharajji roused and pulled the oxygen mask off his face and the blood pressure measuring band from his arm, saying, “Bekar (useless).” Maharajji asked for Ganga water. As there was none, they brought him regular water. He then repeated several times, “Jaya Jagadish Hare” (Hail to the Lord of the Universe),” each time in a lower pitch. His face became very peaceful, all signs of pain disappeared. He was dead.

Among the most well known of Neem Karoli Baba’s disciples were, spiritual teacher Ma Jaya, Ram Dass, the author of Be Here Now, teacher/performer Bhagavan Das, Lama Surya Das and the musicians Jai Uttal and Krishna Das. Other notable devotees include humanitarian Larry Brilliant and his wife Girija, Dada Mukerjee (former professor at Allahabad University and scholar and writer Yvette Rosser. Baba Hari Dass (Haridas) was not a disciple however, he supervised several buildings and maintained the ashrams in Nainital area (1954-1968) before heading to the USA to become a spiritual teacher in California in the beginning of 1971. Steve Jobs, along with his friend Dan Kottke, traveled to Bharat in 1973 to meet Neem Karoli Baba, but arrived after the guru died in September of that year. Hollywood actress Julia Roberts was also influenced by Neem Karoli Baba. A picture of him drew Roberts to Hinduism.

After returning to the United States, Ram Dass and Larry Brilliant founded the Seva Foundation, an international health organization based in Berkeley California that is committed to applying the teachings of Neem Karoli Baba toward ending world poverty. One of Seva’s greatest accomplishments is to have helped return eyesight to over 3.5 million blind people suffering from cataract blindness in countries like Tibet, Nepal, Bharat, Bangladesh, Cambodia and throughout Central and South America and Africa. The organization also has a Native American Community Health Program that works to fight an epidemic of diabetes in Native communities throughout the United States.

In the late 2000s another Foundation evolved, the ‘Love Serve Remember Foundation’, whose purpose is to preserve and continue the teachings of Neem Karoli Baba and Ram Dass. 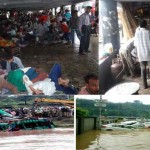