Mathrubhumi, notorious for its stances against Hindus and BJP leadership made a grave mistake while reporting the news of the Supreme Court staying the Maharashtra High Court’s acquittal of Communist terrorist leader GN Saibaba. Instead of the Communist terrorist leader, the channel has given a picture of Indian spiritual master Shirdi Saibaba. Shirdi Saibaba is a spiritual master who has millions of devotees in India.

Many people have criticized the channel’s decision to replace the terrorist leader with Shirdi Saibaba’s picture. This is not the first time that Mathrubhumi has made such a mistake. For the Russia-Ukraine war, the channel used scenes from a video game. When the audience intensified their protest, the channel finally apologized.

Bombay High Court acquitted communist terrorist leader Saibaba last day. But the Maharashtra government immediately approached the Supreme Court and sought a stay on the verdict. The Supreme Court directed the defendants to file a counter-affidavit stating the reasons for not suspending the judgment. 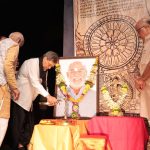