Protests against Chinese President Xi Jinping are intensifying in China, where the spread of Corona has intensified. Protesters blocked the streets and chanted slogans demanding the resignation of the president. People are also sharing posters and videos related to this through social media. On Sunday, the number of Covid-19 cases, which have been soaring for a week, had reached close to 40,000. After that, the protest intensified again.

The protests took place in Shanghai on Sunday. The footage of the protesters shouting slogans against the Chinese government and Xi Jinping was also shared on social media platforms in China. Students from universities in Beijing and Nanjing have also come forward against the lockdown. On Saturday, there were large-scale protests against the President and the Communist Party. It is reported that many people have been arrested in the incident.

Meanwhile, authorities are conducting mass testing in China to identify the spread of the infection and new clusters. Officials said 39,501 cases were confirmed on Saturday. Of these, 35,858 cases were confirmed without symptoms. It is the fourth consecutive day that there is an increase in the number of people infected with the virus in China. 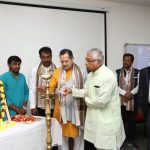