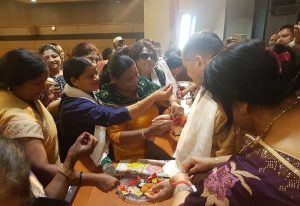 Recalling that this tradition of celebrating Rakshabandhan as Festival of Humanity was started seven years ago, Indresh Kumar Ji said that this was necessary to eradicate animosity and ill-feelings among the people of all hues, especially when some leaders are trying to divide the society in the name of caste, religion, language, and politics. He alleged that the Congress party often indulged in such divisive practices.

Making a strong appeal to the people on this occasion Indresh Kumar Ji urged them to plant trees, keep the surrounding clean, and live in a fresh atmosphere. Pointing to the presence of people from all walks of life and all strata of the society, he said that this was a good omen and initiative of rebuilding of a New India.

This beautiful gathering of humanity rising above the differences of caste, language, sect, and geography strengthened their Indian-ness and tied Rakhis to Indresh Kumar and other dignitaries.

Indresh Kumar said that our mission was to awaken people and to find solutions to various problems. He asked Pakistan and China to vacate the areas of Jammu and Kashmir they have illegally occupied. He warned Pakistan to mend ways and shun anti-India attitude or else face disintegration. 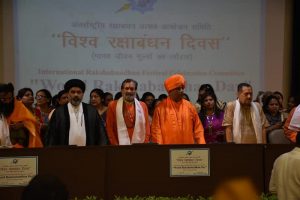 Indresh Kumar said that the Muslims in India share the same ancestors, culture and motherland and therefore, their identity was not due to Babur or Babri but by Sri Ram who is called as Imam-E-Hind by famous poet Allama Iqbal. He said that 130 crore Indians have made a resolve to build a grant temple of Lord Ram at his birth place in Ayodhya.

He said that the evil practices of caste barriers and untouchability were hindering the progress of the country. We will eradicate all such outdated and divisive customs and traditions and make our country ‘Vishwa Guru’ once again, he said.

He appealed to the people to unite and resolve in the interest of humanity to teach befitting lessons to China and Pakistan, avoid use of Chinese goods in our daily life, festivals and pujas, and pray to the Almighty to rid Kashmir, Kailash, Mansarovar, Tibet, entire Himalayas, and Humanity of the Chinese imperialism and Pakistani terrorism.