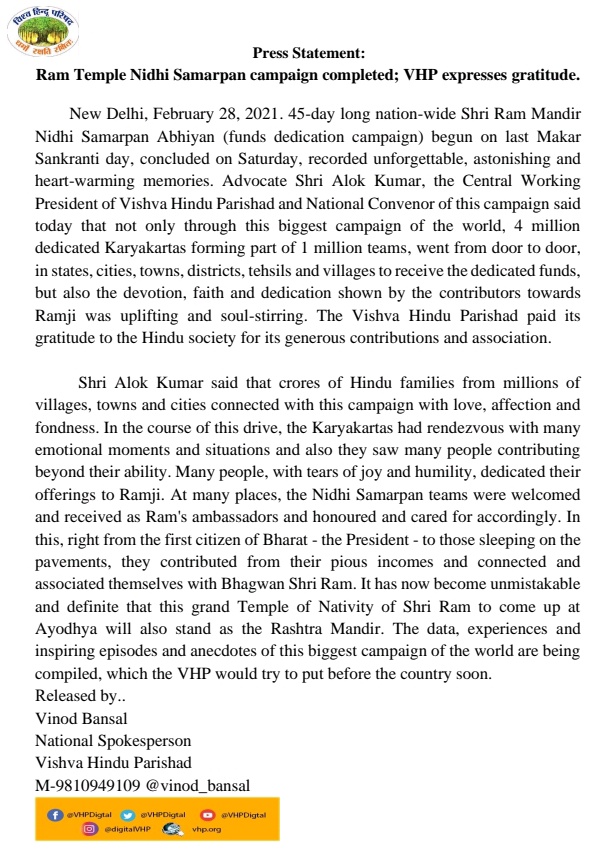 New Delhi. 45-day long nation-wide Shri Ram Mandir Nidhi Samarpan Abhiyan (funds dedication campaign) begun on last Makar Sankranti day, concluded on Saturday, recorded unforgettable, astonishing and heart-warming memories. Advocate Alok Kumar, the Central Working President of Vishva Hindu Parishad and National Convenor of this campaign said that not only through this biggest campaign of the world, 4 million dedicated Karyakartas forming part of 1 million teams, went from door to door, in states, cities, towns, districts, tehsils and villages to receive the dedicated funds, but also the devotion, faith and dedication shown by the contributors towards Ramji was uplifting and soul-stirring. The Vishva Hindu Parishad paid its gratitude to the Hindu society for its generous contributions and association.

Alok Kumar said that crores of Hindu families from millions of villages, towns and cities connected with this campaign with love, affection and fondness. In the course of this drive, the Karyakartas had rendezvous with many emotional moments and situations and also they saw many people contributing beyond their ability. Many people, with tears of joy and humility, dedicated their offerings to Ramji. At many places, the Nidhi Samarpan teams were welcomed and received as Ram’s ambassadors and honoured and cared for accordingly. In this, right from the first citizen of Bharat – the President – to those sleeping on the pavements, they contributed from their pious incomes and connected and associated themselves with Bhagwan Shri Ram. It has now become unmistakable and definite that this grand Temple of Nativity of Shri Ram to come up at Ayodhya will also stand as the Rashtra Mandir. The data, experiences and inspiring episodes and anecdotes of this biggest campaign of the world are being compiled, which the VHP would try to put before the country soon.