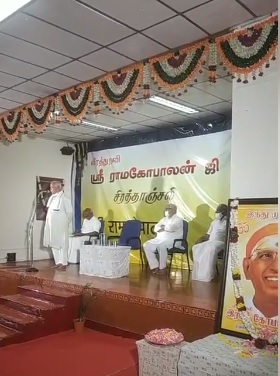 Chennai (VSK). RSS Sarsanghchalak Dr. Mohan Bhagwat Ji said that “For Rama Gopalanji, his position in the organisation was not important; welfare of the Hindu Samaj only mattered to him”. Shraddhanjalai karyakram was conducted on 25th October, at Coimbatore to pay homage to Maa. Rama Gopalanji who left his mortal form on 30th September, 2020.

“Rama Gopalanji joined as Pracharak (full time worker) in 1947 when the society was not ready to receive Sangh (RSS). Drawing inspiration from Dr. Hedgewar and Guruji Golwalkar he tirelessly strived in breaking the rock like obstacle. Keeping up the true spirit of a Swayamsevak, whether as a Prant Pracharak (head of the province) or Sah Prant Pracharak (deputy), he lived by the principles of service and sacrifice. His only expectation was that our Nation must reach pinnacles of glory in all fields and nobody should set an evil eye on the Hindu Society. While leaving this world, he has won the admiration of the Hindu Society for Hindu Munnani and RSS.

His simplicity and affability were remarkable. Within few minutes of conversation, he will create rapport with anybody, a Baal (young) swayamsevak or a VIP. I have felt this warmth and love whenever I had the opportunity to meet him. His enthusiasm and national spirit will catch on whomsoever coming in contact with him.

Today, he has created thousands of swayamsevaks to serve the society. To carry forward the work left behind by him is the only way we can pay true Homage to Rama Gopalanji.” said Mohan Bhagwat.

Earlier, Bakthavatsalan, State Organising Secretary, Hindu Munnani spoke about the grand metamorphosis of Gopalanji when he took up the role of Hindu Munnani. His speeches were down to earth and appealing to ordinary men and women like auto drivers and tea sellers. Vannianrajan ji, Kshetra Sanghchalak, RSS paid glowing tributes about his uncanny ability in communicating even profound thoughts in simple sentences through his speeches and pamphlets and compact books.

Bhaiyaji Joshi, Sarkaryavah (Secretary) of the RSS was also present on the dais. Sah Sarkaryavah Dattatreya Hosabale, Dr. Manmohan Vaidya and Mukunda CR, Kadeswara Subramaniam, President of Hindu Munnani, Senior Swamijis of various Mutts including Chinmaya Mission and leading dignitaries from various walks of life were present in the audience on this solemn occasion. 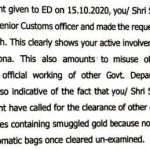