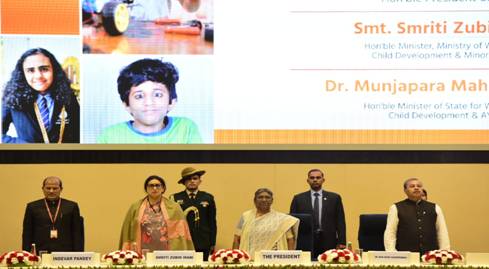 This year the award has been given to 11 children from 11 States/ UTs, representing the diversity of the nation for their exceptional achievements. The awardees of this year include one each in the category of Bravery and Social Service, two in the category of Innovation, three in Sports, and four in Art & Culture. Out of the 11 awardees, 5 are Girls and 6 are boys.

A book on Baal Veer “Young Heroes of India” was also released during the ceremony by Smriti Zubin Irani, who presented the first copy to the President.

Union Minister, Smriti Zubin Irani said that in line with the vision of giving children a safe and happy environment, the Ministry organizes the Pradhan Mantri Bal Puraskar every year to honour children for their outstanding performance in different arenas. This award ceremony is amongst our most treasured occasions as it reflects our commitment to providing children with an atmosphere where they can imbibe good values and principles and become responsible citizens of our country.

Congratulating the awardees, the President stated that by conferring the Pradhan Mantri Rashtriya Bal Puraskar 2023 upon the children, we are encouraging and honoring their contribution towards nation-building. The categories for today’s award ceremony cover the fields which are primarly related to character-building and overall development of society and culture.

In the freedom struggle of 1857, Veer Surendra Sai fought against the oppression of the British and kept fighting against them till he breathed his last. All Indians are proud of Netaji Subhash Chandra Bose, who, risking his life, continued to fight against the British rule right from Europe to Japan. He expressed the spirit of Indian independence even before India attained independence and hoisted the tri-color in Manipur and Andaman.

Philanthropy has been given the highest place in India’s life values. The life of those who live only for themselves is incomplete. Life is meaningful only for those who live for others. The feeling of love for the entire humanity and the cultural tradition of taking care of animals, birds and plants is very much a part of Indian life-values. She stated that it made her happy to see that today’s children are more environment conscious. Children should always keep in mind that whatever they are doing should not have a negative impact on the environment.

In the year 2047, when the countrymen will be celebrating the centenary of independence, these promising children will be shouldering larger responsibilities. She said that they have to make efforts from today itself for India of the year 2047 to be a developed and prosperous nation.

Every year, the Government acknowledges the exceptional achievement of children in the age group of 5 to 18 years by conferring the ‘Pradhan Mantri Rashtriya Bal Puraskar’ upon them. The awards are given to children for their achievements in 06 categories namely; Art & Culture, Bravery, Innovation, Scholastic, Social Service and Sports which deserves national recognition. Each awardee receives a medal, cash prize of Rs. 1,00,000/-, a certificate and a citation.

The nominations for the award were received in online mode on the Award portal of the Government of India- www.awards.gov.in. for the first time. A total of 742 applications were received on the portal, out of which 684 were found fit for consideration. The selection of awardees was made by a Selection Committee under the chairpersonship of the Union WCD Minister. 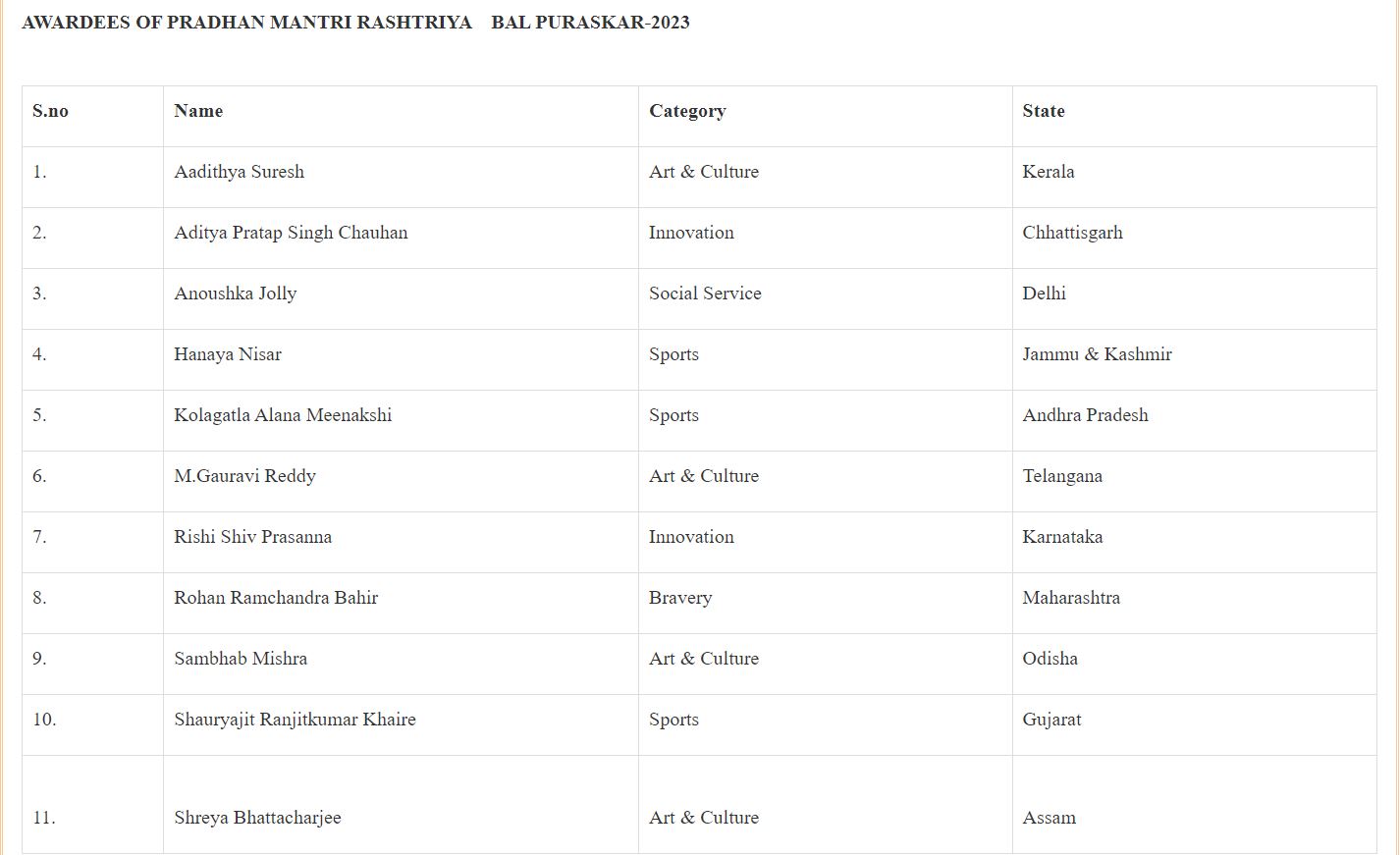 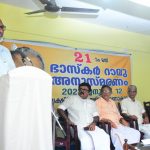 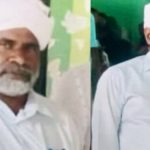