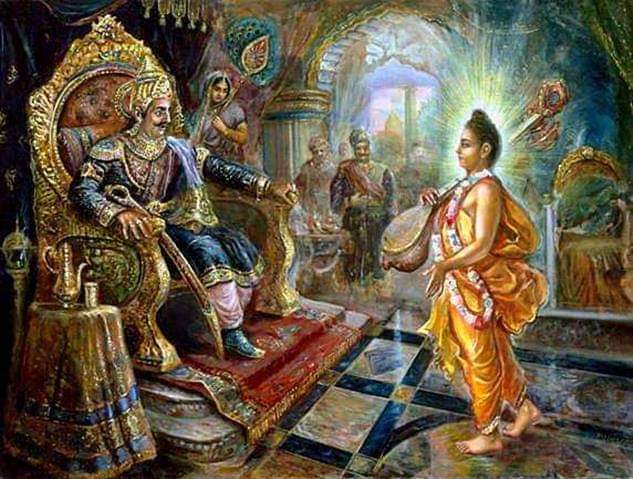 There are large number of Indian texts that deal in variety of subjects from pure spirituality to instructions for mundane daily life. Except for Vedas all these scriptures have a stated period of creation, though for most of them experts have different opinion about the real time of their origin. But there is an agreement amongst all scholars that creation of these books of knowledge originated at least ten thousand years BC, implying that some of these texts are as old as twelve thousand years. The common element of all these scriptures is the presence of four Gods in one form or another. These are Narayana, Brahma, Vishnu and Shiva. But there is another non-God character that occurs in all the ancient Indian texts and that is Narada Muni. Most ancient tail of Indian history is of Raja Harishchndra. Narada is found counselling the king to adhere to the absolute truth even at the cost of losing his kingdom, wife and son.

Later in a dialogue between poet Balmiki and Narada, the former asks the Muni about the identify of the most pious and dharmic’ person. In response, Narada briefly narrates the story of Rama and persuades the poet to write the entire epic and the result is one of the most read and recited book of the world The Ramayana. Later in Mahabharata Narad is almost omnipresent, counselling and influencing the entire course of action. Still later, in most  Indian literature Narada  is woven in the text either as a spiritual sermoniser, counsellor and an effective communicator. In Jainism cosmology there are supposed to be nine Naradas. Narada is frequently mentioned in Jataka Tales dealing with the stories of previousbirths of Budha. The prevalent image of Muni Narada does not at all match with the real character as depicted in the Epics and Puranas. Distortion of Narad’s image appears to be a part of the campaign to demolish all that gives pride to Indians in their past. Now that the Indians are masters of their own destiny it is inevitable that the reality of all great personalities of the ancient and near past is presented to the world. Narad is, in no way quarrelsome, instigator, clown or a joker. He does not fit even into the frame of a journalist of today. Content analysis of some of the ancient texts reveals a different Narada than what he is being presented in films, comics, theatre and modern literature.

It is certain that Narada is not one person but it is the name of an ancient institution that prevailed at all times in ancient past in India. Entire ancient Indian scriptures are spread over more than ten thousand years. No one person can be there in all the three yugas. namely, Satyug, Tretayug and Dwaparyug. Perhaps ancient Indian society had provided for a position occupied by a person who though a human being yet was full of godliness. Narada is described as the intellectual son of Brahma, meaning by that the person of Narada’s stature was conversant with all the intricacies and principles that govern this universe. He is mentored by Brahma himself.  Narada is   found to be a communicator par excellence. He is soft spoken, lucid and factual. At all places Narada proves himself as objective, impartial, unbiased and unprejudiced. He has the freedom to visit anyone at any time. More important is that no one ever questions Narada about the veracity of whatever he says. He is the one who enjoys complete credibility without being accountable to anyone except to his own conscious.

In the current context Narada can be perceived in various roles. Prominent of the roles in which he may be seen are those of:

Narada as an author and creator of knowledge: Narada is regarded as a Muni. A Muni is the one who has realised the truth not only by studying but by realization as well. In his various sermons and advices he created knowledge out of what he has realised about the fundamentals of the Mother Nature and also about the Creator. In Narada Smriti he lays down the rules of living, governance and liberation. In Bhakti Sutras, in 84 couplets, Narada gives as many formulae for managing the relationship between the God and the devotee. He has also created the science of practicing various kinds of music.

Narada as an ambassador at large: He is a frequent visitor to the court of Indira and keeps an eye on all events in Devaloka. He goes to the darwar of Yudhishtra and tells him about the duties of a king in the form of interrogating questions. He visits Shiva in Kailasha to convey the messages of his consort and revers back to Sati with a message.  He counsels both Kansa and Krishana. At many place in the scriptures he is described as an ambassador of Devatas, term used is doota that has been interpreted as messenger. Actual meaning of the word doota and what role Narada played was that of an ambassador, which in Sanskrit means Rajdoota. Since he was not affiliated to any particular kingdom therefore it would be  appropriate to perceive Narada as an Ambassador at Large and not as a messenger.

Narada as a counsellor and a teacher: In a battle between Devatas and Datyas, pregnant wife of the Datya king Hiranykashyapu was captured by Devatas. They intended to kill her to put an end to that lineage of Datyas. Narada intervened and saved the lady. The child, Dhruba was tutored by Narada to be a devotee of Naryana theryby creating a noble person in the evil race of Datyas. Narada has counselled Krishana, Kansa, Yudhistera, Vishnu, Shiva, Ravana and many others and gave  turn to the historical events.

Narada as a communicator par excellence: Narada had the talent to determine what to say, to whom, when and with what consequences. Added to this he also had the expertise of how to say. In the entire ancient Indian literature spread over ten thousand years there is not even a single incident where Narada states any untruth or commits any slander or blasphemy. There is no incidence where the listener or the receiver of his communication asks him to repeat or clarify. He is lucid and straight, does not mince words at any time.

Narada as a spiritual being: Brahma is the mentor of Narada Muni. Narada identifies himself as ‘manas piutra of Brahma and devotee of Naryana’. He is also extremely dear to Shiva with whom he had numerous conversations. The entire art, craft, science and technology of creating, sustaining and recycling everything in this universe including the universe itself is known to Narada. Many a time Narada goes for penance for years to comprehend the realities of life and beyond. His chanting of Naryana-Naryana has a spiritual connotation. His veena plays spiritual music. In all his preachings, spoken or scripted, Narada talks of oneness of all beings and non beings. Eighty four formulae in Narada’s Bhakti Sutras are not religious at all. Each one of the verse has a clear Dharmic and spiritual meaning.

Even in the ancient texts Narada is a revered personality. Krishana has huge regard for him. Two references can be cited. In Chapter 10 of Bhagavad-Gita Krishana tells Arjuna about what he perceives as the best by claiming himself to be that. He equates Narada with Rishi Ved Vayasa, Sage Kapila, Poet Shukracharya and Sidha Kapila.

A more elaborate description is given by Bhishma from his deathbed by referring to Krishana. Yudhishtra visits Bhishma who was waiting for right time to die and asks him ‘who is dear to all, who gladdens all, and who is endowed with all merit and accomplishment’. Bhisma recounts what Krishana had told Ugersen in response to his question as to why did everyone like Narada. Its along answer but to quote in parts:

Narada is as learned in the scriptures as he is noble in conduct; yet he is not proud or boastful. Anger, impudence, fear, and procrastination have left him for good. That is why he is adored by all…..

He never deviates from his word, or overpowered by passion or greed; so he deserves to be worshiped….

..observes the diversity of human thought and behaviour….

..never speaks ill of anybody…

..Who would not make this paragon of virtue, efficient, holy, provident, and tactful—a beloved friend?’

It is a pity that a person so revered by the revered themselves is portrayed as a lowly, conspiring  messenger.

In conclusion, it may be stated that either by design or in ignorance there has been severe character assassination of our one of the most noble human beings during recent past. While the nation is enthusiastically engaged in rewriting our history from our own perspective one of the tasks may to rediscover pious personalities like Narada and learn from their life and preaching the righteous path for the future of mankind.

-Author is a Professor of Science of Communication and presently Chirperson of Haryana State Higher Education Council.

One thought on “Rediscovering Devarshi Narada”