Yawatmal. One should not ignore religion as it is the “base of the nation”, RSS Sarsanghchalak Dr. Mohan Bhagwat Ji said here today at Yavatmal, Maharastra. He was speaking at a function to commemorate the birth centenary of late Jan Sangh leader Deendayal Upadhayay. Union Minister of State for Home Hansraj Ahir was also present on the occasion.

“One should not ignore one’s religion as it is the base of a nation and a nation runs on the concept of family and India’s concept of family is unique,” Bhagwat Ji said, adding that the Indian philosophy and culture spoke volumes about the country’s unity in diversity. He said India was among the leading countries of the world a thousand years ago, but was relegated to the tail-end after the foreign rule which followed.

Talking about the farmers’ issues, he noted that Upadhayay had cautioned the government against the use of chemical fertilisers and promoted the use of organic fertilisers. Expressing concern over the farmer suicides in Vidarbha, Mohan Bhagwat Ji said the farmers must get a competitive price for their produces and be encouraged to use all the technologies which were not harmful to the humanity and nature.

“Pandit Deendayal was a selfless person who devoted his life to the service of the last man in the society as without his (the last man’s) development, nothing can be claimed as development,” the RSS Sarsanghchalak said. 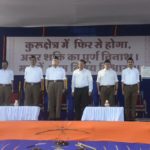