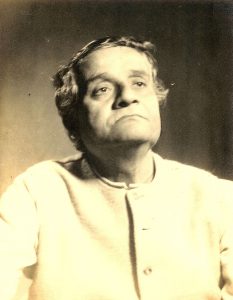 Remembering Jnananjan Niyogi (7th Jan 1891- 13th Feb 1956) on his vardhanti. He actively participated in the freedom movement of Bharat.

He was attracted towards the movement against partition of Bengal in 1905. He formed a youth organisation named ŌĆśBand of HopeŌĆÖ and in 1916, was appointed president of Temperance Federation, a movement against consumption of alcoholic drinks.

In 1870, Keshub Chunder Sen had established the Working ManŌĆÖs Institution. It was meant for education┬Āof the working class and practical training of the middle class. The institution closed down after sometime. In order to revive the idea, Jnananjan Niyogi got together a group of youngsters to form the Calcutta Working MenŌĆÖs Institution at 1/5 Raja Dinendra Street, Kolkata in 1909. Apart from regular school classes, it organised practical training for such crafts as book binding, tailoring, umbrella making, leatherwork and signboard painting. Apart from its educational and training activities, it organised medical assistance and carried out development work for the benefit of the poor residents living in slums.

He extensively toured the rural areas of Bengal and started using the magic lantern for spreading consciousness amongst the poor and uneducated sections of the population. He was a pioneer in this matter and acquired fame for adopting this method of mass communication in India. It proved to be highly effective and soon attracted the wrath of the administration.

In order to promote the use of indigenous materials, he used to organise Swadeshi Mela during the Durga Puja festivities. He set up a permanent exhibition at Barabazar and opened a sales counter named Swadeshi Bhandar at College Street Market. At the request of Subhas Chandra Bose, then Mayor of Kolkata, he set up the Commercial Museum on the first floor of College Street Market and organised a Buy Swadeshi movement.

When refugees poured in from East Pakistan, he put his heart and soul in rehabilitation work. He organised a mobile exhibition on rails the promotion of indigenously manufactured products and displayed his organisational skills during the first all-India exhibition at Eden Gardens in 1948.