New Delhi. Deploring inequality in society, the Rashtriya Swayamsevak Sangh (RSS) came out in support of reservation, saying that it has to remain to bring equality to those suffering from discrimination but cautioned against politics on the quota issue.

“We support reservation. Till the time there is inequality in the society, reservation is needed. To bring up those suffering from this inequality as equals, we need reservation. But there should not be any politics on that,” RSS chief Mohan Bhagwat said during  a launching event of BJP leader Bijay Sonkar Shastri’s three books on scheduled castes — Hindu Valmiki Jaati, Hindu Khateek Jaati and Hindu Charmakaar Jaati here. He said that for 1000 years, those people for the benefit of the country tolerated the injustice. “The reasons for which they tolerated, those reasons are no longer here now as we have gained our independence. Now our duty is to bring them up as equals. To bring them as equals, if for 100 years one has to tolerate injustice, let be it,” he said.

Param Pujya said that a society which aspires development cannot let this go on for a long time and the target of achieving equality should have been achieved after Independence.

Recalling that the mentor of Jansangh, Dindayal Upadhyay, used to say that if one has to bring everybody as equals, then those who are above the ordinary masses should bow and extend their hands to under-privileged. “Through each other’s cooperation, everybody can become equals. If those who are privileged do not bow or bend, those below the line cannot come up,” he said.

Calling for social bonhomie and affinity among different sections of society, the RSS chief cautioned against” pride among the privileged ones. “If you don’t bow down, it is your devastation,” he said adding that there are many reasons for the discrimination in the society.

The preface of all the three books are written by senior RSS leaders — Suresh Soni, Krishna Gopal and Suresh Joshi. In his book on the chamaar community, Shastri has argued that the Dalits originally belonged to the upper castes — Brahmins and Kshatriyas — and even royal families and said he was trying to rewrite history to restore their dignity.

“In the medieval period the oppression of foreign invaders forced people from royal, pious and self-respecting groups to perform unclean and shameful acts. When the British came they called these people Dalits, tried to win their sympathy and divide Hindu society,” he writes.

Shastri’s effort is aimed at countering the Christian proselytisation. “Nearly 99% chamaars in UP were being targeted by Christians…. Around 80% of girls marrying Muslims are Dalits,” he said.

Reservation is needed till inequality in society 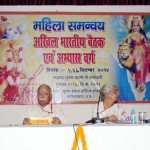