Time for a new security doctrine based on vision of Vir Savarkar-Subhash Chandra Bose and an honest admission that Gandhiji did greats things for India but his ideology of complete non-violence and Hindu-Muslim unity at Hindu cost did much damage to the nation and is bedeviling It even today.

There comes a moment in the destiny of a nation when it should accept the ultimate truth howsoever bitter it might be and end its ongoing suffering to secure its own future. In other words no nation can move forward without squarely facing its past mistakes. Those nations who fail to do so get thrown into the dustbin of history.

With the repeated China backstabs, Pakistan’s continuing terror attacks in J&K and an internal security situation where the actions of a combo of Pan-Islamists and Communists are destabilizing the nation is it time for India to do an analysis of its past blunders and effect a gear shift in terms of its national security vision?

Perhaps yes. India has been aware of the nature of the deceptive Dragon since 1962. After Prime Minister Modi came India did take measures to contain China and turned India from an underdog to an equal partner before China. And yet it allowed itself to be lulled into complacence in Galwan valley. Modi did a great job of befriending anti-China powers like Japan and Vietnam, wooing back pro-China powers like Myanmar, and opposing Chinese aggression in South China sea and lastly taking anti-China stand in Covid related issues.

None can deny that his grand plan to build military and civil infrastructure on the 34,00-km-long Indo-China border was one of the provocations for the Chinese incursions. But on the other hand India revealed a weak spleen after Modi’s arrival when it prevented Dalai Lama from being vocal against China in an attempt to appease the Chinese and in the end got deceived as shown by the latest episode. Even when China was opposing designation of Maulana Masood Azhar as a terrorist by UN we chose not to play up Tibet as well as Chinese atrocities against Uighurs Muslims in Xinjiang.

Let’s start with a throwback into history. Jahawarlal Nehru’s blunders on national security front which cost us heavily in the 1962 Indo-China war were rooted in the ‘peacenik’ thinking of Gandhi ji. Nehru’s Panchsheel doctrine for which India paid a heavy price against China was a mixture of Gandhi ji’s non-violence and his affection towards Left ideology. The great visionary of India’s national security Veer Savarkar had warned in 1954 when Nehru came up with the Panchsheel doctrine that such kow-towing to China after its aggression in Tibet would whet the Chinese appetite for swallowing land and he won’t be surprised if China did that with India itself. He was proved correct eight year later in 1962.

There are more examples of Gandhism’s dark shadow over India’s national security. Around 1978 an upright leader like Prime Minister Morarji Desai under the influence of Gandhian ideology committed the monumental blunder of revealing to the then Pakistan dictator Gen Zia Ul Haque that India had a spy network in Pakistan and that he (Desai) knew about progress of the Pakistan atom bomb project at Kahuta.

Next , Zia weeded out all of India’s moles, set up by a resourceful Indira Gandhi during her tenure as Prime Minister as part of her successful plan to create a great spy network in Pakistan. Zia killed some of them while others managed to flee. Desai also rejected Israel’s request for refueling facility to its fighter jets in India for destroying the Kahuta facility. Interestingly, till Modi’s arrival as PM Indira Gandhi came closest to a robust national security vision that India needed but she too demonstrated serious flaws because of the Gandhian streak.

After breaking Pakistan into two pieces in 1971 war she failed to settle the POK issue even when India was holding 93,000 Pak jawans as prisoners. On the contrary in the Shimla agreement with ZA Bhutto she gave back Pak territories that India had won in Sindh region in that war. Before that in the Tashkent Agreement under Lal Bahadur Shastri India had given back to Pak areas that it had won in 1965 war.

On the internal security front India allowed as many as 10,000 foreign Wahabi missionaries of Tablighi Jamaat to come to India since 2014 to preach an exclusive brand of Islam that turns local Muslims against the idea of nationhood. The Indian security establishment has been aware for years that Tablighi Jamat is the biggest Wahabi movement in the world spread over 150 countries and forges the vision of Ummah (World Islamic brotherhood) which militates against the Idea of nationalism.

But yet it is proof of the lack of national security vision of a nationalist Government that 10,000 foreign-based Wahabi missionaries were allowed to preach in India in the past six years. The Shahinbag movement was a creation of Pan-Islamists or Wahabis who wanted to fix Modi and Shah for having dealt repeated blows to their plan of Islamising India by winning Assam and Uttar Pradesh elections and freeing J&K from the clutches of Article 370 besides facilitating a judicial solution of the 500 year old problem of Ram Temple. Removal of Article 370 was proof of Modi’s Government’s great committment to issues affecting national security which was just unthinkable in recent past. It carved the names Modi and Home Minister Amit Shah in golden letters in Indian history.

And yet the Government by its actions allowed the situation to spiral out of hand in the Shahinbag issue in the hope of winning the Delhi polls, thus dwarfing a national security issue before a small state election. A clinical national security vision warranted that the Government at the centre woo the non-Wahabis to isolate the Wahabis in the Shahinbag issue. But instead, driven by election fever, the BJP targeted entire Muslim community thus uniting the hardliners and the moderates.

Against Pakistan India, which is four times the size of Pakistan, might have taken revenge for Pulwama but it is still not able to contain that terror nation even today despite herculean efforts. Pak-sponsored terror attacks continue in J&K. Yes, on the national security front India is in a far better position than it was in the past several decades but the fact remains like the previous Govt’s the Modi Government too has failed to impose sufficient cost on Pakistan or China for their transgressions against India like Israel does for hostile Muslim nations. Clearly, there is something wrong with India’s security vision and there is urgent need to fix it both internally and externally.

What is the way out? It is very clear that Gandhi ji’s contribution has brought immense dividend to India on the international stage. On the national platform his model of social service and Swadeshi, his vision of Gram Swaraj that aims at making villages self reliant and his idea of Trusteeship which inspires businessman to contribute to the progress of the poorer sections of the society by apportioning a part of their personally-owned wealth for poverty elimination have greatly inspired the nation. His method of Dalit assimilation is also nationally recognized.

But it is equally true that his ideology of complete non-violence and Hindu-Muslim unity at Hindu cost first led to partition by spurring the demands of Muslim League. Later in Independent India it allowed the Pan-Islamist elements to take advantage of his austere ideology to further their own agenda in the name of various slogans woven around Gandhism. It is not without reason that in Shahinbag protests across India and even in foreign countries the first photo at every demonstration was of Gandhi ji. So it is clear that the Gandhi model of Hindu-Muslim unity has become a tool to blackmail the majority community with. 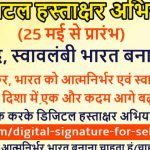