Speaking on the occasion, RSS Akhil Bharatiya Karyakarini Sadasya V. Bhagaiah Ji said that the Vijayadashmi Utsav is celebrated across the country to celebrate the triumph of truth and good over evil. It was on the day of Vijayadashmi Utsav that the RSS was established.

He said that all RSS swayamsevaks should serve the masses with a firm belief in the fact that truth and dharma always triumph.

People of Bengal eat fish but the peoples of Gujarat and Andhra Pradesh do not eat fish. There is no harm in either eating fish or abstaining from fish. One does not commit any sin by eating fish, he said.

Some primary duties and responsibilities of all RSS swayamsevaks are protection of Bharat, preservation of its identity and consolidation of Hindu world.

People who serve the community/society with a strong sense of love and sacrifice and see all societal lapses as their own lapses are called Swayamsevaks. He asserted that Swayamsevaks should always work for the welfare of the society and the masses.

On reaching 100 years, the RSS has taken up several initiatives like water harvesting, plantation of trees and preservation of nature. He also appealed to all the people to minimise use of detergents considering its purported harmful effects to health and nature.

He then appealed to all Swayamsevaks to work with firm determination to bring social harmony and for the welfare of rural people and farmers. The responsibility of bringing peace and stability in the world lies with Bharat, he added. 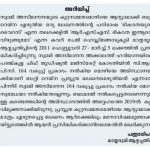