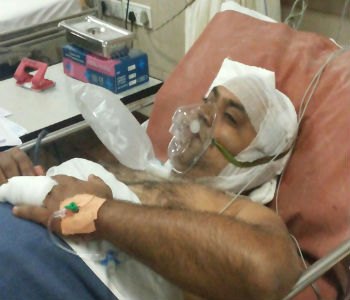 Bangalore. Phaneendra, 44, an active karyakarta of Rashtreeya Swayamsevak Sangh (RSS) was brutally attacked by anti-social elements, on morning of Aug. 14. Now he is out of danger, said RSS Sources.

Phaneendra, who serves as Jalahalli Nagar Ghosh Pramukh of RSS, was on his way to attend morning Shakha (routine RSS gathering) near Jalahalli. Suddenly a group attacked Phaneendra. As he was seriously injured with deep injuries to his head, immediately he was admitted to Mattikere MS Ramayya Hospital.

‘His condition is critical, we are waiting for the medical report’ said KS Sridhar, RSS Bangalore City Secretary (Mahanagar Karyavah). A complaint has been lodged at Vidyaranyapura Police station. DCP Suresh visited and handling the situation.

RSS condemned the incident and demanded for immediate arrest of the miscreants. “Three years ago almost at the same area, an RSS Swayamsevak Lakshmi Narasimhaiah (60), was attacked brutally while going for a shakha, however he was fortunate enough to save his life”, remembered KS Sridhar.