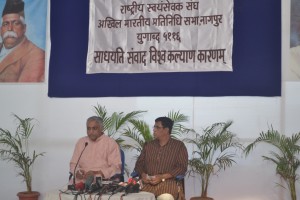 Nagpur, March 12. Dr Manamohan Vaidya, Akhil Bharatiya Prachar Pramukh of RSS briefed the press about the Akhil Bharatiya Pratinidhi Sabha ABPS which will be held at Reshimbagh in Nagpur for 3 days from tomorrow March 13 to 15, 2015.

In the curtain raiser Press Meet ahead of RSS ABPS meet Dr Vaidya told that Akhil Bharatiya Pratinidhi Sabha is the yearly meeting of RSS for evaluation annual programs and performances. Around 1400 selected RSS representatives and office bearers of parivar organisations from various part of the country are participating the three day meet. He said that the reports and achievements of organisations working in different social domains will be shared in meeting.

ŌĆśRepresentatives elected from RSS-Shakhas of all regions of the country, state level office bearers of RSS, National office bearers of Sangh affiliated (Sangh Parivar) organizations will attend all three days of the meetingŌĆÖ said Dr Vaidya.

Rashtriya Swayamsevak Sangh (RSS) strongly favours imparting education at primary level through mother tongue and would pass a resolution to this effect in its three-day annual meeting of its highest decision making body Akhil Bharatiya Pratinidhi Sabha (ABPS) at Nagpur.

Vaidya said that the ill-effects of education through English medium at the primary level and too much importance attached to that language have come to the fore. Many an educationists have strongly recommended that primary education be imparted through mother tongue only for ensuring all round development of the pupils.

The meeting will also discuss the ŌĆśSangh Vistar YojanaŌĆÖ which bore very good results in states like Assam and North Karnataka. Plans to consolidate these gains would also be deliberated upon, he said.

There has been considerable increase in number of shakhas as compared

to last year, Dr Vaidya said adding that the number of shakha places was 43000 in 2012 and that has gone up to 55000 in 2015, thus registering a 18 per cent growth. ŌĆ£This shows the growing acceptability of RSS work and favourable atmosphere for the Sangh thoughtŌĆØ, he said.