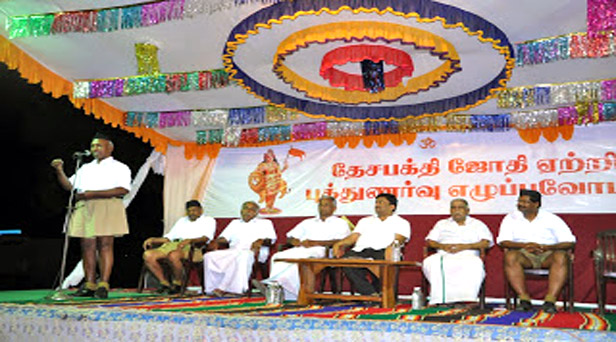 Sangha Siksha Vargha, the Annual Training camps (both 1st& 2nd year) concluded with an impressive public function held at AET Matric Higher Secondary School, Erode on 17th May 2014. The trainees demonstrated various physical activities like Yoga, Karate, Dhanda, Sanchalan, mass drill, ghosh etc., which they learnt in the camp. A cross section of the people of Erode (around 2000) including a large number of women enjoyed the demonstrations. The highlight of the demonstration was rotating of plate on the finger continuously by a trainee while doing Padavinyas, which reminded of the Sudarshan Chakra of Sri Krishna.

Sri Chinnasamy, MD Agni steels, who presided over the meeting said that he is happy to be the part of a patriotic function. He highlighted the role of RSS in bringing unity amongst the various strata of society and appealed that it should be taken to the society at large.

Sri Vanniyarajan, Kshetra Sanghachalak, in his address highlighted on vision of Swami Vivekananda—‘we have to see the nation reach the pinnacle of glory with our own body’—is becoming true through RSS. The Sangh has faced three situations: teasing, stiff opposition and today favourable situation. The Sangh is striving to make the Hindu society solve all its problem like caste discrimination, disrespect to women, etc. on its own. For this RSS is creating a power house. He appealed to the public at large to associate with the Sangh by involving themselves in any of the various activities being carried out by the Sangh for the betterment of the society. 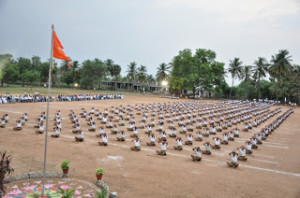 Akhila Bharata, Kshetra, Prantha Adhikaris guided the trainees. 565 swayamsevaks (340 swayamsevaks in second year and 225 swayamsevaks in first year) participated in the Vargha which was held for 20 days. Various meets like Elites’ Meet, Young Entrepreneurs Meet, Youth Meet etc., were organized during the camps. Mathru Bhojan function, Village Contact programme etc., were other highlights of the camps.

One thought on “RSS annual training camp concludes at Erode” 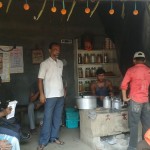