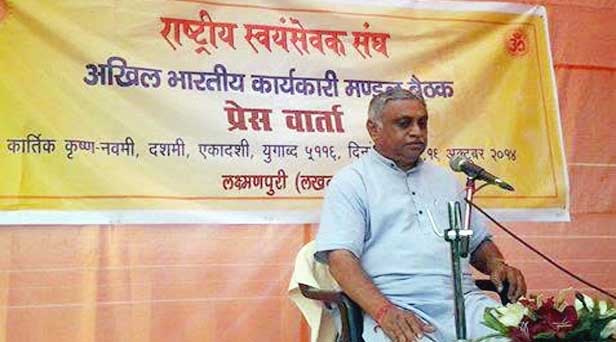 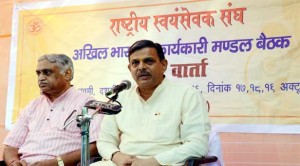 Shri Dattatreya Hosbale, SahSarkaryawah of the RSS said that Sangh’s Swayamsevaks have always rushed to offer help at times of natural calamity. For instance, during recent weeks the Swayamsevaks have actively taken part in the rescue and relief operations at Jammu Kashmir, Meghalaya and Vishakhapatnam.

He also said that the government is to decide its priorities towards fulfilling the promises made by the party in its election manifesto such that the livelihood problems of a common man are resolved. 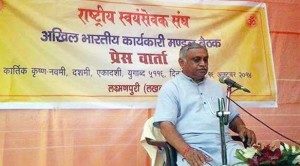 Further during his interactions with media, Dr Manmohan Vaidya, the Akhil Bhartiya Prachar Pramukh of RSS said that historian Ram Chandra Guha and other Comrades created a needless controversy over live telecast of the speech of Poojniya SarSanghchalak of RSS Shri Mohan Bhagwat during VijayDashmi Utsav at Nagpur. Manmohan ji explained that historians such as Guha were worried that people would now know about the correct facts and untruths spewed against the RSS by comrades.

Manmohan ji added that RSS considers every Bhartiya citizen as Hindus. It does not discriminate against anybody on the basis of their religious moorings, caste or class. He added that people from all walks of life and religious affiliations are joining RSS. 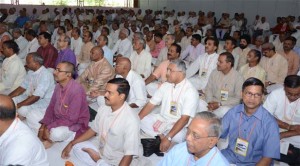 “We have created the facility on our website for an individual to join RSS. Till 2012, around 1,000 people expressed their desire to join RSS every month using this facility. This increased to 2,500 every month in 2013 and has now touched around 7,000 every month,” he said.

Responding directly on the subject of Muslim’s association with the RSS, Manmohan ji said, “Muslims are coming to the Sangh Shiksha Vargas (training camps)…All Bhartiya citizens are equal in the RSS, irrespective of their class, caste or religion.”

He explained that during last year around 80,000 people (age group in between thirteen and forty) participated in the seven-day Prathamik Shiksha Varga (training camp) for initial training to learn about the workings of RSS, and this year this figure has now touched 1.2 lakh. 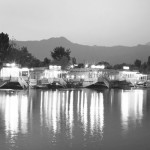 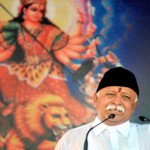