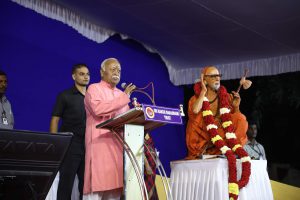 RSS Sarsanghchalak Dr. Mohan ji Bhagwat inaugurated a collection of 56 paintings on the life and teaching of Kanchi Mahaswami and released āParam Vaniā Hindi version of āDeivathin Kuralā. The event was held in Chennai at Kanchi Mahaswami Vidya Mandir near Tambaram on Tuesday Jan 21, 2020.

HH Shri Omkarananda Swami graced the occasion. Shri RA Sankara Narayanan M.D & CEO, Canara Bank was the guest of honour. The paintings portray the stiff challenges faced by Kanchi Mahaswami right in his early days, his travel across length and breadth of the country by foot, contribution in kindling patriotism among the masses and spirit of service.

His simple way of living which was a constant penance for welfare of the poor and all sections of the society brought solace and inspiration to many. 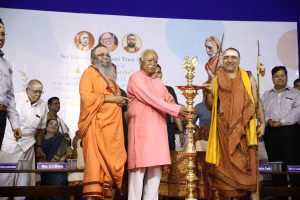 His amazing knowledge on a wide range of ancient and modern subjects with an ability to narrate in simple language understood by all, has made the collection of his lectures in Tamil, ‘Deivathin Kural’ a treasure of knowledge. It has inspired many people to dedicate themselves for the cause of Dharma.

In welcome address by Shri Bombay Sankar, head of the Mahaswami Trust that runs the school, elaborated about the schoolās development and progress, inspired by the benign grace of Kanchi Mahaswami, who was like sunlight that penetrated the minds of all the people. He emphasised that students who undergo Vedic education along with modern education in their school, have performed better than students who study in regular stream of education. Thus, traditional learning methods have proved to be highly beneficial for students undergoing integrated education. He said Guru Bhakti and Rashtra Seva are the purpose of this institution. 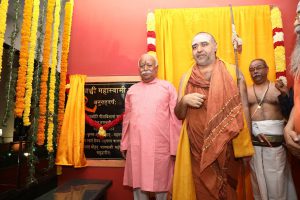 Speaking on the occasion, Dr. Mohan Bhagwat, said āThe Mahaswami symbolised Sanatana Dharma and guided many people through his life. All the great saints of this land did not just preach but exemplified by living what they preached. When Swami Vivekananda asked him if he had seen God, Sri Ramakrishna Paramahamsa said, āYes I have seen God as I see you now!ā. Harmony is established when everyone lives in harmony. This philosophy of the world is the same. Harmony occurs when everyone is in harmony. That the world is one family, Vasudhaiva Kutmbakam, is an ideal that originated in India. We all have to live and guide the generations to come accordingly. A teacher guides student through his ideal living.

āAfter realizing the spiritual truths, examine them several times, and then stay with the same. Spirituality is the soul of India. Dharma guides us to realise God. The integrated education system is the perfect combination of spiritual education and modern education. In todayās context, such integrated education is essential. This will strengthen the mental and physical faculties of the students. There is no doubt that this educational institution, which provides integrated education, has a great future. Everything is progressing in this world. Improvement should not affect nature. Sometimes the Dharma seems like Adharma and Adharma appears as Dharma. It is necessary for spiritual enlightenment to distinguish and understand what is right.ā 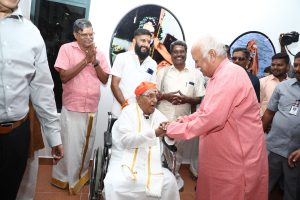 In his benediction, Pujyasri Vijayendra Saraswathi Swami said, “The connect between Sri Sankara Mutt and RSS is profound. The sage advice of Paramacharya guided the work of Guruji Golwalkar, the second Sarsanghchalak of RSS in improving the society and the nation. RSS administers thousands of educational institutions in far-off villages, hilly areas and other parts of the country, thereby teaching patriotism and devotion. In the absence of teachers, RSS manages the schools with āsingle teacherā. Since the RSS leader is here, it is only appropriate to say that this integrated education system will spread across the country.

We must spread our national pride, with focus on economy, science, humanity, nature, culture, heritage, and mother tongue. Besides, scriptures like Thevaram, Tirupugazh, Ramayana and Mahabharatha are to be taught. This is the integrated education system.ā 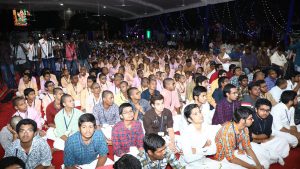 In his benediction, Swami Omkarananda said, “By studying āDeivathin Kural, the Hindus are living as Hindus and Indians are living as Indians. As Valluvar says, āIt is necessary to learn properly and conduct ourselves accordinglyā. The school’s value will rise automatically when the students have the right facilities to study.

Mohan Ji Bhagwat released the Hindi version along with His Holiness Shri Vijayendra Saraswathi Swamigal. H.H Swami Omkarananda a master teacher of deep Vedantic Sanskrit texts in simple Tamil blessed the occasion.Ā It is a matter of great joy that the people in North India can henceforth read the profound message of Deivathin Kural in Hindi.

Mohan ji Bhagwat also felicitated Priyavrata Patil, a 16 year old lad who achieved a great feat in Vyakarna Shastra studies by clearing all 14 tests in Tenali Maha Pariksha . He has completed it in two years what is usually completed in seven years.

Mohan Bhagwat earlier had an interaction with the students in the premises and blessed them.

The event concluded with the national anthem. 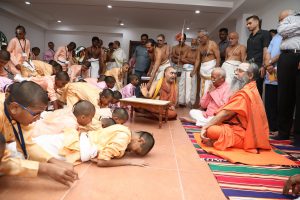 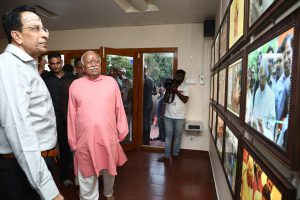