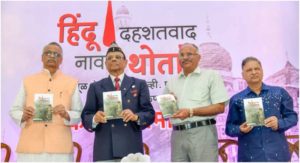 Mumbai. Unleashing a deep-rooted conspiracy that shook the very base of working in the bureaucracy, RVS Mani, the former Secretary of the Home Ministry, has stated that there was a sinister plot to make Maharashtra a hotbed to establish the term ‘Hindu Terror’. RVS Mani made a sensational claim that he was hounded in the most barbaric way to frame the then Gujarat CM Narendra Modi and Home Minister Amit Shah in the Ishrat Jahan encounter case.

Mani was talking at the function where the Marathi version of his most talked book ‘Hindu Terror – Insider Account of Ministry of Home Affairs’, was released.

Commemorating 10 years of the dreadful Mumbai Terror Attack, the Marathi version of the revealing book by RVS Mani named ‘हिंदू दहशतवाद नावाचे थोतांड‘, was released at the Taj hotel on Wednesday by Retired General D.B. Shekatkar along with the author RVS Mani. Noted senior journalist and author Arun Karmarkar has authored and translated the book.

While speaking on why he was triggered to translate the book and make it accessible to Marathi readers, Karmarkar pointed out that such a sensational book with alarming indications and serious ploys against India, it has been undermined by the mainstream media in India.

Karmarkar further highlighted that the term Hindu terrorism was born because of some fornication of Congress leaders and selfish administrative officials. The book is a revelation, a medium to expose the sin created by the Congress keeping national security at stake for their own benefits.

The centre of the attraction was the speech by RVS Mani who faced a kidnapping plot against him from the insiders of India’s security agencies and was stabbed by burning cigarette buds to establish various notorious narratives to score cheap political points.

Mani unfold the pages of dark history of the then UPA government which stooped to a level where he was forced to frame the then Gujarat CM Narendra Modi and Home Minister Amit Shah in the Ishrat Jahan case, stabbed by cigarette buds to change affidavit and also was tried to trade off him, to save Mumbai attack terrorist Ajmal Kasab. RVS Mani pointed out how there was a conspiracy to make Maharashtra a laboratory by maligning Hindus and establishing the narrative of ‘Hindu Terror’. He further added that the book reclines an ode to a loyal, truthful, and courageous Army Officer Colonel Shrikant Purohit who was wrongly wickedly framed keeping the national security at the highest risk.

RVS Mani has revealed the outrageous manoeuvres by which a United Progressive Alliance (UPA) government ensured that a fake narrative of Hindu terror was brought into public discourse while evidence relating to real terrorists was suppressed. This whistleblower account by a former Home Ministry officer presents a shocking picture of a nation whose security was seriously compromised at the highest levels resulting in a series of terror attacks including the 26/11 Mumbai attack. Mani referred about a particular communication in which he was told that establishing PM Modi’s role in Isharat Jahan encounter case was a commitment given to “THE MADAM”. He also referred about a high ranking lady officer in Maharashtra government bureaucracy who was present at the time of the attack on Hotel Taj on 26/11 and was ‘successful’ escaping in just 6-7 hours when other hostages were freed after the NSG operation around 72 hours later.

Retired General Dattatreya Shekatkar who was the chief guest of the function, alerted that there are 9 big states that are prone to terrorism. Covering the belt from Gujarat to West Bengal, the spread of terrorism will shake the country keeping the life of the upcoming generation at stake.

Notably, it was General Shekatkar who had forewarned Late RR Patil, the then Home Minister of Maharashtra about the unfortunate Mumbai Attack which the later neglected in a most careless manner. The book ‘हिंदू दहशतवाद नावाचे थोतांड‘, has been published by Param Mitra publications.