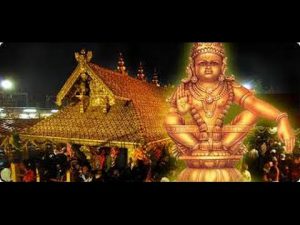 Trupti Desai, the controversy monger has returned again to target Sabarimala tradition. She and her team landed in Kochi International Airport at 5 am today. They told the media that they are heading to Sabarimala to enter the temple. She carried the SC verdict of Sept 28, 2018. Bindu Ammini, one of the two woman activists who violated tradition last year, is part of Desai’s team.

Despite government’s policy not to allow activists to enter the temple, they have not disclosed their stand so far. It has now been informed that the government will not permit these women to enter the temple until the larger bench of the Supreme Court issues its verdict. Police will communicate this to Trupti’s team. If they still insists on temple entry, they will be arrested.

Kochi Police Commissioner has told Trupti Desai that she and her team would not be given police protection to enter Pathanamthitta district (Sabarimala belongs to this district), let alone to Sabarimala temple. He can give protection to them upto Kochi Int’l Airport (for leaving Kerala). Later he repeated this to BJP and Hindu Aikyavedi leaders. Then the devotees stopped their protests. Meanwhile, Hindu Aikya Vedi Ernakulam district organizing secretary A.B. Biju has been hospitalised as he fainted when police pushed the protesters out from the commissioner office premises. BJP workers say that the police had kicked Biju.

She also targeted Janam TV which was the only channel to capture the activists’ live bite at airport in the wee hours. Bindu Ammini was heard saying that ‘this is Janam TV, don’t give comments’. Last year Janam was the only channel which covered Sabarimala 24 x 7 and showed the whole world the sort of nexus among CPM, LDF regime, anti-Hindu forces, activists and police when they all worked hand in glove to violate Sabarimala traditions.

Earlier, devotees led by Hindu Aikya Vedi and BJP leaders sat on the road and carried out ‘Namajapam’ as a mark of protest against attempts to desecrate Sabarimala by Trupti Desai and team. They were asked to leave the Commissioner office premises.