Dr Hedgewar sowed the seeds of eternity for RSS 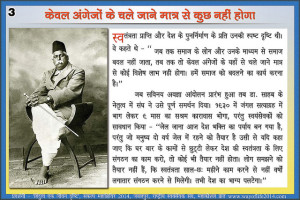 Rashtriya Swayamsevak Sangh (RSS) has dominated the social scene in all spheres of life today. Its opponents are worried over its ever increasing strength and they miss no opportunity to malign its name and fame. But in spite of all their attempts to defame the organisation, this ŌĆśRashtra ShaktiŌĆÖ is on the rise complicating their worries. On the other hand, the nationalist forces are happy and assured at the bright future of the country with its growing strength. They are willing to join and cooperate the RSS or any of its social welfare activity, and contribute their might in the process of nation building.

It has been observed that the number of those willing to join the RSS on internet was 1000 per month in 2012. It increased to 2500 per month in 2013 and 9000 in 2014! This is sufficient to indicate the growth of RSS. The secret of this growth lies in the pure national outlook of RSS and a chain of selfless, devoted, dedicated and committed workers.

While this huge Banyan tree, called RSS, is touching new heights, its roots are penetrating deeper and deeper searching new sources of the elixir of life. The very idea about the seed of such a huge Banyan tree enthuse our minds. It was Dr Hedgewar whose 125th birth anniversary coincides this yearŌĆÖs ŌĆśVarsh PratipadaŌĆÖ. How was that seed?

Born on the auspicious occasion of Varsh Pratipada (April 1, 1889) Keshav Baliram Hedgewar was a born patriot. He came from an orthodox Brahmin family, which had no connection with the freedom struggle nor was there any major movement for freedom in the Central Provinces then. But the spark of freedom burnt in the heart of young Keshav and his heart throbbed for freedom. This urge of freedom became visible through many incidents of his childhood days. Noteworthy amongst them were throwing away the sweet box distributed to the students on diamond jubilee of Queen Victoria; or refusing to go for enjoying lighting and decoration on the government buildings to commemorate the arrival of George Vth in India, and many more such examples.

Young Keshav was the mastermind of ripping through the infamous Risley Circular that prohibited the singing of Vande Mataram in 1907 against the background of ŌĆ£Bang-BhangŌĆØ movement. When the School Inspector entered a classroom he was greeted with a shout of ŌĆ£Vande MataramŌĆØ. Obviously, Keshav was the inspiration of this protest. He opted for Calcutta to pursue his studies in Medicine as Calcutta happened to be the core centre of revolutionary activities then. He joined the Anusheelan Samiti, the topmost revolutionary outfit, and soon admitted to its inner most circles. After completing his medical studies and obtaining licence to practice, he came back to Nagpur but did not get involved in practice nor did he think for entering into a married life. His life aim was to free the motherland and he plunged into the freedom struggle then.

Dr. Hedgewar was entrusted with the responsibility of a volunteer corps of 1920 Congress Session in Nagpur. He raised the volunteer force of 1200 for it. Besides, he proposed two resolutions to the Draft Committee. One of them was related to full freedom of India. And the other was freeing other countries of the world from the clutches of imperialism. However, these resolutions could not see the light of the day. But when Congress passed a resolution of full freedom in 1930, Dr Hedgewar wrote to all the RSS Shakhas to congratulate the Congress. This showed his all encompassing vision.

Despite his differences he was of the opinion that all should join hands to throw off the shackles of slavery without weakening the movement. Due to this thinking he did not express his displeasure on Congress support to ŌĆśKhilafatŌĆÖ Movement, though he had differences with Mahatma Gandhi on this issue. He participated under the leadership of Gandhi in the non-cooperation movement and suffered jail term.

To achieve Independence is very important for any society but to create a society infused with national values, ethos and character to uphold and protect the freedom was more necessary and fundamental. Dr Hedgewar realised this and decided to start the RSS in 1925. He mingled with the youths and led them by his example through the technique of daily shakha, which happens to be real forte of RSS. Worship of strength, collectivism, discipline, patriotism, national pride and love and compassion for entire society and work selflessly for the society with full dedication were some of the virtues he wanted to inject and infuse into the Hindu society through the technique of daily shakha. Traversing the entire country in spite of his falling health, he succeeded in spreading the countrywide network of RSS in the short span of 15 years.

He did not have slightest of hesitation to use modern means to obtain desired results even though he had deep faith in our age-old culture and traditions. He always used to project his comrades to the forefront of the work and it was this style of his that laid a very strong, unshakable foundation of the RSS.

He not only kept in touch with various movements in the society aimed at Independence of the country even after he founded the RSS, but he also participated in them. In 1930, he participated in GandhiŌĆÖs Civil Disobedience Movement and participated in ŌĆśJungle SatyagrahaŌĆÖ in Vidarbha and suffered a nine-month jail term at Akola. But he also took care of RSS and appointed Dr LW Paranjape, his close associate as Sarsanghachalak and made arrangements of senior swayamsevaks to look after the Sangh work. The society was then divided in Congress, Revolutionary, Tilakites, Gandhites, Hindu Mahasabhaites and so on. Dr Hedgewar kept himself aloof from all such fractions yet he had good cordial relations with all of them. He sailed the RSS through such turbulences like an expert captain.

He ensured that RSS does not become yet another organisation in the society. He developed RSS as an organisation of the entire society. He introduced the tradition of ŌĆśGuru DakshinaŌĆÖ to make RSS self-reliant and self-sufficient. He placed the traditional ŌĆśBhagwa DhwajŌĆÖ, a symbol of dedication, renunciation, and selfless service, as the ideal ŌĆśguruŌĆÖ. He was against projecting any individual as ŌĆ£guruŌĆØ because he was aware of the shortcomings of an individual. That is why the RSS work is spreading to new areas and constituencies even after nine decades without diversions.

Dr Hedgewar was free from the ego of being the founder of RSS. Though he agreed to be Sarsanghachalak on the requests of his colleagues in 1929, he expressed his mind in 1933 meeting of the Sanghachalaks thus:
ŌĆ£I am fully aware of the fact that I am not the father or founder of the RSS; I am only performing the duties of a foster-mother of RSS as per your wish and would continue to do this so long as you wish and desire.

I would not care for any difficulty, problem or insult, etc. ŌĆ£Whenever you feel that RSS is suffering owing to my incompatibility you are free to appoint any proper and competent person to the post. I will owe my allegiance to the new incumbent and work as a devoted swayamsevak as happily as I have opted to work as per your order. For me personality does not matter. It is the mission of Sangh that matters, therefore, I would not hesitate to do any work in the interest of the SanghŌĆØ.

This was a very revolutionary and radical thought considering the social condition of his time. He did not give much importance to criticism against RSS, avoided debates and discussions and insisted on established cordial relations even with his opponents.

He followed the Sanskrit dictum that said ŌĆśavoid debateŌĆÖ and ŌĆśsans opposition from allŌĆÖ. He remained firm in praise and criticism. Nothing could dislodge or dissociate him from his chosen path. He would accept the praise as inspiration to speed up Sangh work and criticism as ignorance of the critics.

In 1936, Shankaracharya Vidyashankar Bharati honoured him with the title of ŌĆ£Rashtra SenapatiŌĆØ. This news got wide publicity and letters started pouring in. But he directed all the swayamsevaks to refrain from using this honorary title as this would be in contrast with our nature. He even discouraged those who wanted to write his biography. ŌĆ£The nation firstŌĆØ attitude he created thus in the RSS.

He would teach not with words but with actions. He used to say that people would judge and like the RSS as they experience the RSS and not by publicity. We have sown the seed, now without discussing or publicising it we should work for nurturing it. The fruits would make the identity of the person who had sown the seeds known.

Therefore, even after his death, in spite of the difficulties, upheavals in national life, the RSS is marching on its chartered course undisturbed, unfazed encompassing the entire society. This success story of RSS is in fact the success story of Doctor HedgewarŌĆÖs dedicated, epoch-making, and meaningful life as an organiser par excellence.