Kerala. Shocking events are taking place at Satyasarani, an Islamic religious education center where Hindu, Christian girls are converted, reports Janam TV. Hundreds of Hindu-Christian girls were converted in Satyasarani under the auspices of the banned terrorist organization Popular Front.

According to reports of investigative agencies, those who underwent religious conversion from here have gone to terrorist organizations.

The aim of the jihadis is to trap Hindu, Christian girls under the guise of love and bring them to Satyasarani for conversion. Satyasarani is a place where even the police are not allowed to enter. Hindu organizations have organized protest programs at Satyasarani citing that the activities going on there are mysterious.

In 2016, the police found the 21-year-old daughter of an army officer in Thiruvananthapuram from Satyasarani, an Islamic religious education centre in Manjeri. At the behest of then ADGP B Sandhya, the police raided Satyasarani and seized records of the conversion of Hindu and Christian girls. The police had informed that during the search, they got the information of the persons, including a BAMS student belonging to a Brahmin family in Kannur.

Nimisha, who is now in Afghanistan, was recruited into the global terrorist organization IS and converted to religion at Satyasarani. Another Hindu girl Athira has testified in the High Court that after converting Hindu, Christian girls in Satyasarani, they would recruit them into the terrorist organization IS. Athira also said that such activities are being done here under the leadership of Popular Front women leader Zainaba.

Father of another girl Ashokan had given a statement to the police that Satyasarani’s role was crucial in the conversion of his daughter Akhila, a native of Vaikom. Many Hindu, and Christian girls are victims of conversion here. Most of them are students and housewives from Kasaragod.

Public protests are intensifying against Satyasarani, the Islamic conversion centre in Manjeri, which is creating social chaos through religious conversion. Shocking documents were seized in the raid conducted by the NIA at the Popular Front centres. There is a demand for an investigation against Satyasarani, who is conniving with terrorism and working to recruit people to terrorist outfits. 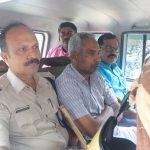