Handed out 2500 masks with money raised from charity 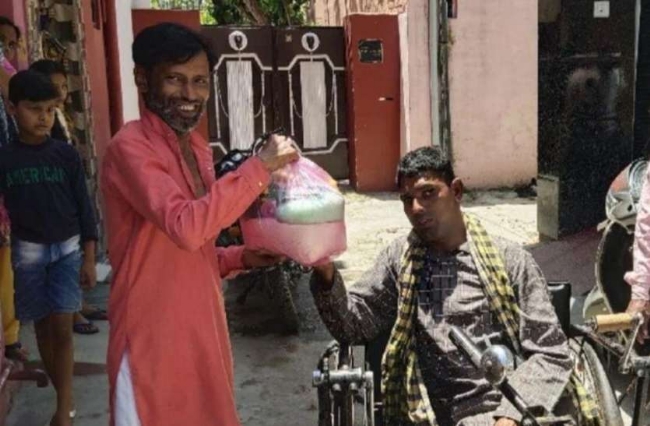 alandhar. Raju, a Divyang from Pathankot in Punjab has been unable to walk since his childhood. But his physical condition did not stop him from serving the society during these testing times. Raju has been helping the needy families during lockdown with the money he raised from charity of the residents in the city of Pathankot.

Raju makes a living with charity from good Samaritans in the city. He traverses the city on his wheelchair and raises a small amount everyday from the alms given to him by people during the day. However, when lockdown was declared, Raju was not able to go out on the streets to seek charity and was obviously worried about his daily needs. He had saved some money which he planned to use during the lockdown.

For his service in distributing ration to the needy and gifting masks to passers-by, Raju has spent more than 80 thousand rupees from his savings which he had raised through charity. Raju did not bother about his own needs but chose to help people in distress with his savings. His self-less act has inspired many to serve the needy.

Inspired by Raju’s service, people are now willingly contributing to his funds for ration and masks.

Apart from his service during lockdown, Raju has helped 22 poor girls get married in the last 20 years. He used his own money for the wedding of these girls. Raju has also contributed to the construction of a small bridge in the city which was the cause of several accidents.