Mumbai. Maharashtra Anti-Terrorist Squad has come out with a shocking information on the planned attack of the now-banned Popular Front of India. PFI had conspired to target the Ram temple, smash and to build Babri Masjid at the same location. ATS also revealed that PFI’s aim was to make India an Islamic country.

The ATS had earlier arrested five terrorists who were involved in anti- national activities. The plot on Ram temple was revealed while interrogating these terrorists, informed the Squad. Popular Front had conspired to conduct terror attacks in several parts of the country. Their plan included the destruction of Ram Mandir in Ayodhya and construction of masjid.

Centre banned PFI last month after hundreds of persons allegedly linked with the organisation were detained or arrested in raids across several states. 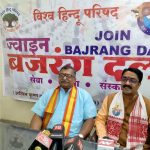