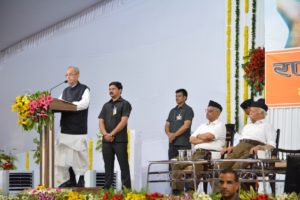 I want to share with you some truths that I haveĀ internalized duringĀ my fifty year long public life, as aĀ Parliamentarian and Administrator.

In the happiness of theĀ peopleĀ lies the happiness of the king, their welfare is his welfare. He shall not consider as good only that which pleases him but treat as beneficial to him whatever causes happiness to all people.Ā KautilyaĀ points out in thisĀ shlokaĀ very succinctly that the State us for the people. People are at the centre of all activities of the state and nothing should be done to divide the people and create animosity among them. The aim of the state should be to galvanize them to fight a concerted war against poverty, disease and deprivation and to convert economic growth into real development with the objective of spreading Peace, Harmony and Happiness inform the formulation of our public policy and guide all the actions of our state and citizens in their everyday life. This and only this will be able to create a happy nation, where Nationalism flows automatically.