New Delhi. Vishwa Hindu Parishad today opposed a Lifestyle Exhibition called ‘Alishan Pakistan’ scheduled from Sept.11 in New Delhi. In his letter to the chairman FICCI, the state secretary General VHP-Delhi shri Ram Krishna Srivastava said that the sentiments of our citizens would heart if you allow promotion of any product of the country, which is attacking Bharat by various means since its inception.

Releasing letter to the media the state Media incharge of VHP shri Vinod Bansal said that the citizens of Bharat could have allowed the exhibition in the name of “Terrorist Pakistan”, “Anarchist Pakistan” or “Kapoot Pakistan” but not “Alishan Pakistan”. In his letter the VHP Delhi said that “this exhibition would promote products of the country that is continuously attacking us directly and indirectly. The activities of last fifteen days are more intolerable wherein it is not only violating seize fire but also promoting separatists on our own soil”. If this exhibition is not cancelled, by saying Pakistan “Alishan” the Bullet, Gun and Zihadi Terror culture, which is reining Pakistan, would be encouraged, he added

A copy of this letter has also been sent to the LG & the Commissioner of police NCT of Delhi alongwith the India Trade promotion organization which will provide venue – Pragati Maidan, it is scheduled from September 11 to 14 this month. In the name of initiative to normalize business & economic relations, FICCI in collaboration with the Trade Development Authority of Pakistan (TDAP) is holding this 2nd edition of ‘Lifestyle Pakistan’ exhibition in New Delhi.

According to a press release of FICCI, the four-day exhibition is taking place at one of the largest trade fair venues in Delhi, Pragati Maidan, from September 11-14, 2014, with over 150 exhibitors of a vast array of Pakistani fashion, textiles, jewellery, accessories, home textiles, furniture, marbles and agro products. 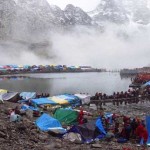