Swami Vivekananda was quite an extraordinary sanyasi woven in a different fabric. He stands out as a reformist. When other Hindu swami ji’s confined to only religious routines such as pooja, yatras, sermons on our religious texts, Swamiji tread a new path. He felt that for Hindutva to bloom in full, Bharat should become free. To achieve this, he awoke the atman of our countrymen and to work for personal and national liberation simultaneously – (Atmano mokshartham jagat hitaya cha).

As in any other religion, in Hindu society too there are orthodox sections, who prohibit people sailing across the oceans. That too, for a sanyasi it was totally an unthinkable one. Here again, Vivekananda was unusual. For Vivekananda, who wished the world to know the greatness of Sanatan Dharma, he travelled all the way to America’s Chicago to participate in The Parliament of Religions scheduled to be held on September 11, 1893. With Ma Bharati’s and his Guru Ramakrishna Paramahamsa’s blessing he rose up to deliver his speech. His opening sentence was “brothers and sisters of America”. Those two words were sufficient for the audience and thereby the discerning men and women of the world to understand the fundamental concept of Sanatan Dharma that is, vasudaiva kutumbakam which means the whole universe is one family.

Many, in our country were initially wondering as to why Swamiji travelled all the way to USA, to propagate the greatness of Hindutva. Here lies the genius of Swamiji. All through his days as wandering monk- parivrajaka across the length and the breadth of our nation, he had grasped that all our countrymen’s eyes were fixed on the West and were interpreting every issue from the stand point of the westerners. Therefore, he contemplated that to make our men and women appreciate the treasures of Sanatan Dharma, first he will have to win the hearts and approval of the Western world. Thus, he shrewdly availed the opportunity presented in the form of The Parliament of Religions. By his series of speeches across USA and Europe, he caught the attention of men and women who mattered across the globe.

During his second visit, he consolidated the gains of the first, deepened and broadened the reach of Hindutva by raising a chain of Ramakrishna mutts everywhere. Thus, till date we witness, thousands of Hindu Saints and Seers establishing their own centres to take forward the message of our Sanatan Dharma.

Thereafter, his job was made easy. When eminent thinkers and authors like Sir Arnold Toynbee wrote if only all the people of the world followed Hindutva, world would have been freed from wars, murders rapes and other unrest and peace will be flowing everywhere, our people swallowed those ‘pearls’ of wisdom. What to say, the mental slavery was so deep rooted then! (Has it totally changed even now?)

There is a misconception in our country that a religious person, especially sadhus, should starve himself and look pale and bearded, to demonstrate his ascetism. However, that was not acceptable to our Swamiji. He emphasized that STRONG MIND COMES FROM STRONG BODY. Swamiji also told that he prefers a person who plays football rather than sit idle in road corner praying. Swamiji’s appearance itself with cleanly shaven face, in aptly fitting robes testified that religiousness does not mean running away from the world, but rather lead the world in education, making men and women realise the perfection within every one and contribute in nation- building.

Swamiji, borrowed the teachings of Bhagavad Gita, Vedas and Upanishads and through his simple and powerful speeches brought them within the reach of the common man.

Swamiji was a revolutionary in another aspect also. At a time, when our orthodox religious people were hesitant to accept as shishyas people from the then considered as thought lower castes, or shudras etc, or women. Ramakrishna Mission, under his guidance accepted men and women without any distinction on the basis of caste or creed. Many Westerners willingly followed him by settling here and serving our countrymen. Notable among them was Bhagini Nivedita, an Irish lady born Margaret Elizabeth Noble. 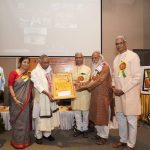