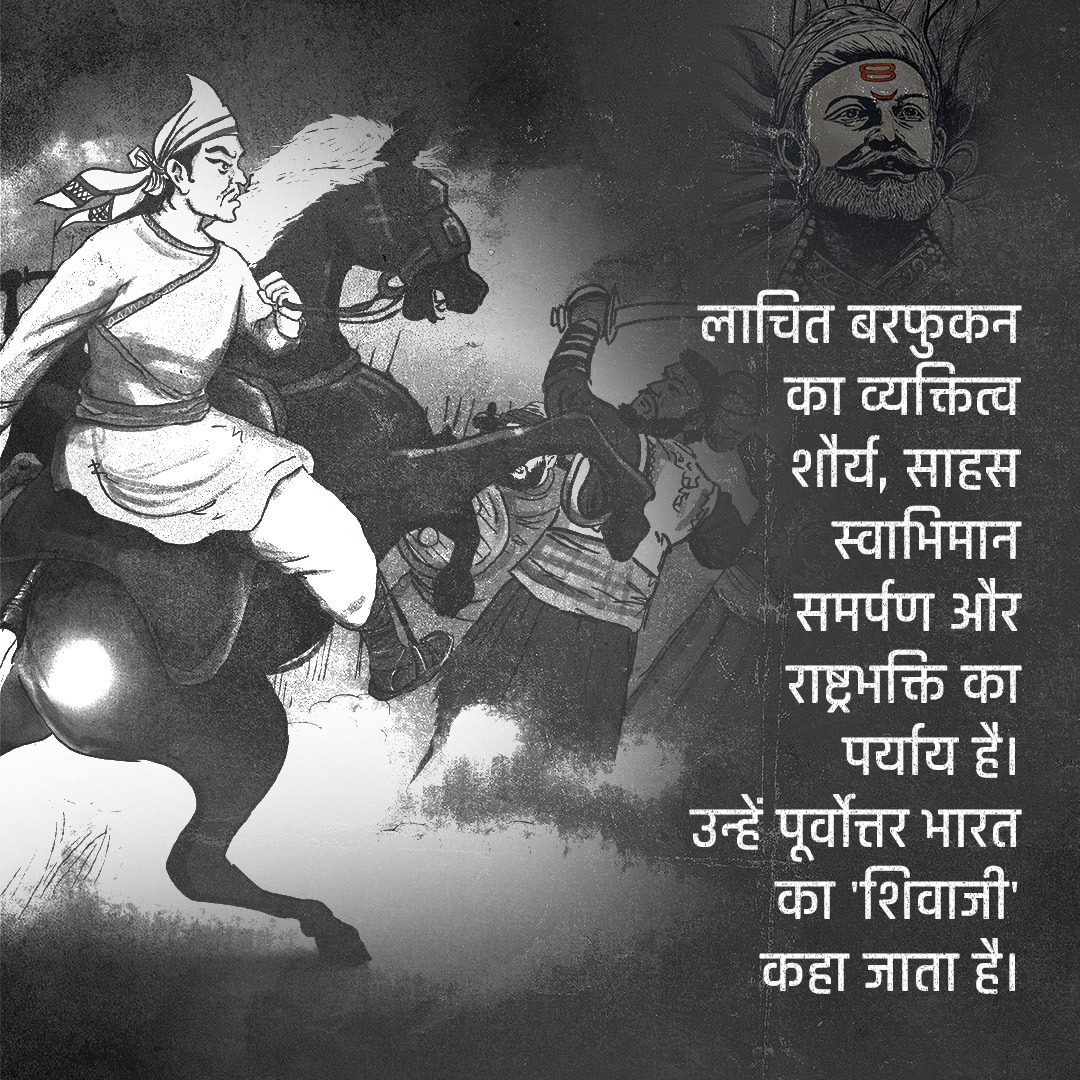 Originally named as Lachit Deca, Lachit Borphukan, the fierce and indefatigable Ahom Commander, was born during the early 17th century at Betioni in the Golaghat district of modern Assam. His father, Momai Tamuli Borbarua was the ‘Governor’ of the kingdom and also ‘Commander-in-Chief’ of Ahom army under King Pratap Singha during his reign starting from 1603 to 1639. Lachit received military training from an early age and joined the Ahom King Jayadhvaj Singha (1648-1663) as a scarf-bearer. The post ‘scarf-bearer’ or ‘Soladhara Barua’ is considered as a part of the incumbent king’s personal staff.

In the subsequent time, owing to his military training, Lachit was appointed as ‘Ghora Barua’ or ‘Superintendent of Royal Horses’. Later he was promoted to the post of Commander of the Simulgarh Fort situated at the south bank of Brahmaputra. When Chakradhwaj Singha became the king of Ahom dynasty during 1663 to 1669, he appointed Lachit as the Superintendent of the Royal Guards.

Finally, Lachit was appointed as ‘Borphukan’ by King Chakradhwaj Singha. Then onwards, Lachit Deka was known as Lachit Borphukan. The position of Borphukan, which is one of the top five councillors in the Ahom kingdom, was instituted by King Prataap Singha (1603-1641). Borphukan is a position embedded with both executive and judicial powers with its headquarters at Kaliabor in Assam. Lachit shifted the headquarters to Itakhuli in Guwahati.

Assam was facing incessant Islamic invasion since January 1662, when Mughal General Mir Jumla II also known as Nawab Muazzam Khan attacked Ahom capital Gargaon. Mir Jumla II never defeated the Ahom King Jayadhwaja Singha as the king retreated to the hill and continued guerrilla warfare. Prolong fight and the prospect of a stalemate disturbed the calculation of the Mughal General Mir Jumla. Frustrated Jumla was forced to sign a humiliating treaty with the Ahom king to which his official historian Shihabuddin Talish in his ‘Fathiya-i-ibriyya’ wrote that ‘A similar case had never happened before in the history of Delhi’. But portion of Ahom kingdom was lost and its suzerainty was challenged. During this time, Lachit was posted at Kaliabor. King Jayadhwaja Singha died unhappy in 1663 and asked his successor Chakradhvaj Singha to avenge the Mughal attack on Ahom kingdom.

By November 1667, Lachit, with his military prowess, evicted the last vestiges of Mughal presence from the frontier of Assam. Mughal Emperor Aurangzeb Alamgir was enraged after the humiliating defeat and in January 1668 sent a strong contingent of Mughal army under Raja Ram Singh Kachwaha of Amber to defeat Lachit Borphukan and his army.

Raja Ram Singh Kachwaha was supported by a massive 71,000 Mughal troops (4,000 troopers, 1,500 gentlemen troopers of the household cavalry of the emperor, 500 imperial gunners, 30,000 infantry, 15,000 archers and infantry and 20,000 cavalry). On the other hand, Lachit Borphukan was fighting the battle with a few thousand soldiers. The battle of Saraighat, which was occurred in 1671, was the culmination of many small fights in between the two rival armies. The Mughal troops started fighting under Raja Ram Singh since February 1669.

As Sir Jadunath Sarkar, in H.K. Barpujari edited ‘The Comprehensive History of Assam’ has written that after observing the huge Mughal army, a very concerned but iron willed Lachit stated, ‘It is a tragedy that my country is facing this dire catastrophe during my Phukanship. How will my king be saved? How will my people be saved? And how will my posterity be saved?’ Nevertheless, Lachit was never demoralized and gathered courage to fight against the Mughal army.

Lachit led the fight from the front and inflicted crushing defeat to the Mughals at every front. Lachit outmanoeuvred the army of Raja Ram Singh at every war, which led to the stalemate of the battle. Aurangzeb asked his general to initiate diplomacy and sign a friendly treaty for the time being. But Lachit’s trusted lieutenant Atan Burhagohain, who later became the Commander-in-Chief opposed such a deal stating that the treaty would be an example of typical Mughal treachery.

The final battle of Saraighat started in 1671. On the day of Saraighat battle, Lachit was terribly unwell. However, despite being ill, he displayed tremendous valour, extraordinary bravery and exemplary leadership. Such an action by an ailing yet forceful Lachit motivated his troops. They fought the battle with fierce zeal and intense courage. The Mughal army suffered comprehensive defeat in the hands of Lachit’s army.

The Mughal General Raja Ram Singh was in awe with the fighting spirit of his adversary. In a glowing tribute to Lachit, a defeated Raja Ram Singh roared to announce that ‘Glory to the Commander…One single individual leads all the forces. Even I, Ram Singh, was not able to find any loophole and an opportunity in his game plan to outdo him.” Such was the ardent character of Lachit who re-established the Ahom flag above the royal palace in Guwahati.

In April 1672, a year after the decisive battle of Saraighat, Lachit died at his Kaliabor headquarters.

Owing to his unparallel heroism, Lachit has been a hero and an inspiration for generations of Assamese. People of all hues in Assam invoke Lachit’s name to fight back and win from the verge of defeat. Lachit Borphukan is an example of bravery, courage and statesmanship.