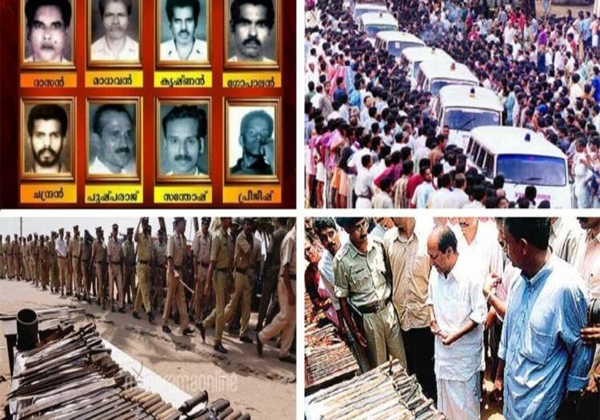 The massacre at Marad brings the frontline of terror closer to our doorstep. It was the 2nd May 2003, under a crescent moon at the Marad Beach. The Hindu fishermen, most of whom had just hauled their daily catch and were resting on the beach, never knew what hit them. Three teams of about a hundred armed men climbed out of their fibreglass boats onto the shore. Another batch eased out of a house near the Marad Juma Masjid. Armed with swords and machetes, clutching coke cans filled with gelatin, they rushed in from all directions. The hit team melted away within minutes, leaving behind the dead and the living dead. The dead – Chandran, Dasan, Gopalan, Krishnan, Madhavan, Prajeesh, Pushparaj, Santhosh, were hacked to death in a choreographed storm of flashing swords and machetes. Some had their private organs torn out.

The entire anti-Hindu media in Kerala downplayed this incident. They were busy highlighting the local people who fled that area. None of the Kerala visual / print media visited the victims’ homes. The senior editor of a leading visual media suddenly attacked ‘unbiased secularism’ and called for a condemnation of ‘whoever was responsible for the attack’. Did anyone know who was responsible? The pattern was quite clear. When Hindus die, it is better to be vague about who is responsible or blame both communities as being equally responsible for the violence. You just cannot blame the Muslims alone, can you? Massacre or no massacre, it was ‘secularism’ that mattered.

A former investigation officer has revealed that the arrested Pak citizen Favaz who came here to fund terrorism, had connections with Kerala politicians. A youth leader who was linked to Marad Massacre had contacted Favaz multiple times. Why didn't Kerala police inquire into it? pic.twitter.com/9Dw2JE3T03

The so-called intellectuals in Kerala who were silent on the Marad incident are the ones who usually start singing poems even when there is a perceived threat to any minorities. They used to visit Olavenna on many occasions. They were at the forefront of criticising the Sangh Parivar when some culprit burned a Church in Trivandrum. When Medha Patkar, the human rights activist, arrived in Kerala on the 11th May 2003, just ten days after the massacre, some of the less cynical among the Hindus were expecting her to utter the ‘M-word. No such luck; Medha condemned the Gujarat violence of last year and the war in Iraq, but Marad was totally off her radar screen. Hindus were invisible.

Marad attack was the latest atrocity in a long series of attacks carried out to clear the Malabar coastline of Hindu presence. If one ignores the atrocities of 1921, the attacks against the Hindu community in Marad can be said to date back to 1954. On the 28th March, Islamists attacked a Hindu procession of the temple at Naduvattom near Marad. Even before that, the anti- Hindu offensive had started in Kozhikode. October 1952 saw the murder of the President of the Cow Protection council at Payyoli. The attacks continued for three months. Secular governments came and went. 1958 saw a concerted campaign being organised against the procession annually taken out from the Manathala Vishwanathan temple near Chavakkad. The trouble lasted for almost a year. A steady exodus of Hindus from the coastal regions of Kozhikode accompanied these incidents.

With roughly 130 Hindu families of Marad gone, the stretch of Kozhikode beach, 65 kilometres long, from Ponnani to Marad, would be totally cleansed of Hindus, just as Hitler’s Germany became Judeo free. There are 26 private landing zones on this stretch, ideal for clandestine beach landings in the moonlight for the transit of weapons or currency. It had taken the Islamists 50 years to clear the beach.

Till today, Marad is the only beach in Kozhikode where Hindu fishermen dare to go to sea on Fridays. In other places, a ‘fatwa’ is enforced, preventing anyone from going to sea for fishing on that day, considered holy by the Muslims.

Let us hope Marad serves as a wake-up call to all Kerala Hindus.