Rashtriya Swayamsewak Sangh was established on the day of Dashehara or Vijayadashmi in the year 1925 with an aim of making our society happy and strong and to place India at the pinnacle of prosperity with this incredible approach in the mind. Gradually Sangh started spreading its wings across the country. With this activity in progress, it started influencing the minds of the society and also that of the women.

How can the women become independent? How can women become self reliant? In what way women’s mind can be made stronger? Distressed with all these thoughts in her mind, Lakshmibai Kelkar saw the Sangh’s disciplined shakhas. She experienced the influence of discipline and positive thoughts that changed the mindset of her children when they began attending shakha. She thought that in the same manner the women can also join the shakha so she met the Sangh founder Dr. Hedagewar to seek his permission. But she was convinced when he explained her reasons for not allowing so. However, she thoroughly studied the mechanism of shakha, the objective of organising the Hindus and the path, Sangh had chosen to follow to achieve the goal.

Accordingly, she founded the Rashtra Sevika Samiti, on Vijayadashami in 1936. The very name in English resembles to Rashtriya Swayamsevak Sangh. The Sangh’s pioneering work of having nationalistic women in the organisation began with this. The Sevika Samiti today has now spread across almost all the states in our country and across all the districts too. The five thousand plus shakhas, one thousand plus projects, fifty two main centres are the symbols of the identity of Samiti’s work. The Sevika who attend shakhas have not only contributed in accepting the role of securing our nation during partition in

1947, but also contributed in ’62, ’65 and ‘71 war, contributed in the gloomy time of Emergency, along that contributed in Ram Temple movement with all the dedication, took part in Kashmir movement. May it be a natural calamity or a man made calamity, the sevikas’ have made their nature as the helping one to all.

With the Sangh’s expansion, the Swayamsevaks have pioneered in founding the great institutions which include Bharatiya Janata Party (Bhartiya Jansangh), Bhartiya Majdoor Sangh, Vishwa Hindu Parishad, Vanvasi Kalyan ashram, Akhil Bhartiya Vidyarthi Parishad, Bhartiya Kisan Sangh to name a few. In all the institutions, the women have contributed from the start of the initiatives. Not that the women richly contributed but they remained a significant strength at the core of all these institutions in terms of development, decision making process, in leadership, may it be a small village or it be at an international level. At the time of Emergency, when men were jailed under MISA, the women took care of all household issues. Not only that, the women by becoming Satyagrahi showcased their Durga Avatar. Today there are more than 1.5 lakh plus Sangh’s social service projects are operational. And one can note that the women are also affiliated with these projects. Village development, family awareness, awakening of Dharma, social unity… in all these fields of life one can experience that, women have formed an important part of these projects.

In the recent times, an all India survey covering all sectors of population was conducted in respect of 43,225 women. Seven thousand volunteers undertook survey spanning over 435 districts from 29 states. This pioneering survey was done by Drishti Stri Adhyayan Kendra.

In our Indian culture, the role of women power is highly praised. That power, that energy is not only seen in Goddess idols, but also in real women, living women and it is very vibrant in nature. It is present in Swayamsevak’s houses, in Sangh’s service, she is a mother, she is a daughter-in-law, she is a sister, and last but not the least, she is national spirit which has shaped the Sangh’s social service. 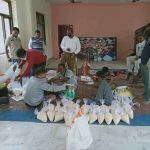