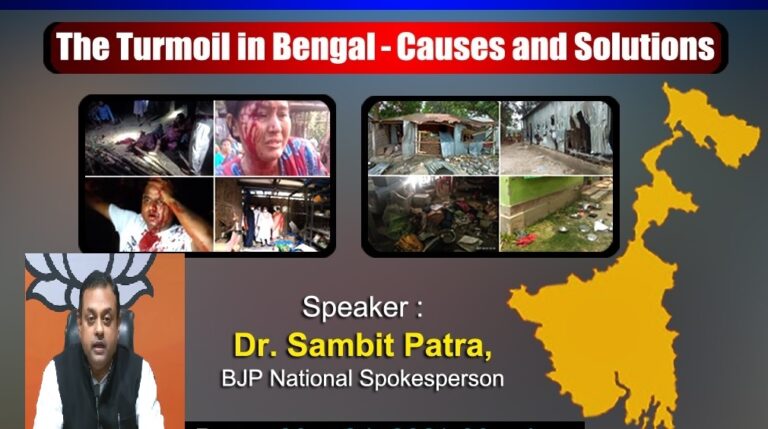 Bhagyanagar. “It is not correct to presume that the Centre is not doing anything on the issues of post-poll violence in West Bengal and the Rohingya infiltration and appeasement issue”, said Dr. Sambit Patra.

“Not everything can be articulated on a public forum and there is a need to trust the intentions and plans of the government and to have patience,” “Kuch jaan kar chalo, kuch maan kar chalo” he asserted.

Sambit Patra was speaking on the issue of ‘Turmoil in Bengal : Causes and Solutions’ at an online talk organized by Pragna-Bharati.

Sambit Patra started off with a prayer that along with Pragna i.e. Buddhi, (intellect) Lord Jagannath and Lord Venkateshwara may grant the boon of wisdom to Nationalists so that security of Bharat Maa is never jeopardized. He recalled that once upon a time, it was said ‘What Bengal thinks today, India thinks tomorrow’ but ruled that the current rulers of West Bengal are making it rot in corruption and economic stagnation. He noted that West Bengal was the only state, of the five states which went to poll recently, which witnessed violent transition of power, Dr. Patra asserted that the post violence in West Bengal is undoubtedly state sponsored and that the CM is complicit and so are the media and the administration. He recalled how the media turned out in hordes to cover the Hathras issue was maintaining a deafening silence, the highly visible bloodshed in the State notwithstanding. “The biased and insensitive media had the cheek to ask whether the reported violence is fake and what can be more insulting to the hapless victims of the violence?”

He said the Congress, the Muslim League and the Communists have been guilty of perpetuating an anti-Hindu polity and of establishing a cult of electoral violence. “Bengalis who returned to WB from the erstwhile East Pakistan never talked about the fact that their secularism was beaten black and blue by the radical Islamism over there. The persecution and subjugation of Hindus and Hindu culture in WB has been such that even Shyama Prasad Mukherjee who was initially for an ‘Akhand Bengal’ later on wanted the partition of Bengal to save the Bengali Hindus and the Bengali Hindu culture,” he recalled.

Ayush Nadimpally of Samachara Bharati initiated a question-answer session and, in answer to a question, Sambit Patra asserted that it is not correct to presume that Govt. is not doing anything on the issues of post poll violence in WB and the Rohingya infiltration and appeasement. “Not everything can be articulated on a public forum. The plans of the govt. need time to take shape and things will happen. Remember the Hindu maxim ‘Kuch Jaan kar chalo, kuch maan kar chalo (know certain things and understand certain things) to underscore the point that the govt is indeed thinking and working on the issue,” responded.

Dr Patra emphasizer that nationalists should be very active on social media which has emerged as an influential forum and direct the discourse in the right direction. “We on our side think, discuss, debate and do things in a democratic manner but ‘they’ just do it and something needs to be done about this skewed fight between constitutional ways and unconstitutional bullying,” he remarked.

Answering another question, he said that there cannot be a better leadership than what is being provided by Prime Minister Narendra Modi and Home Minister Amit Shah. He exhorted everyone to contribute for the nationalist cause in their own way, according to their abilities. He told the audience that CAA and tightening of FERA norms were definite pointers.

The session was initiated by Srikanth Konda, introducing Sambit Patra as an able and erudite spokesperson of the BJP. Padmashri Hanuman Chowdhury ji of Pragna-Bharati touched upon the demographic challenge facing the electoral fortunes of the nationalist party BJP. He underscored the point that about 80% of the Hindus (who constitute 65% of the population of the state) of West Bengal would have to vote for BJP for it to get 51% of votes – a tough task when we take into consideration the divided Hindu polity. Later on, Shirish Dhopeshwarkar, President of Pragna Bharati, Telangana, talked about the four P’s of Pragna-Bharati viz. Public Awareness, Publications, Puraskaar and Promotion of patriots.