No iron, steel to be used in construction of Hindu temple in UAE 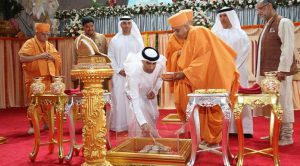 New Delhi. The first Hindu temple in Abu Dhabi (UAE) will be built without using any steel or ferrous materials. The temple will be built adopting the traditional temple architecture in India.

According to media reports Ashok Kotecha, spokesperson of the temple committee informed that usually building foundations have a mix of concrete and steel. However, as per traditional temple architecture in India, no steel or iron reinforcements will be used.

ŌĆ£Fly ash will be used to reinforce the concrete in the foundation. Throughout the whole structure of the temple, the architecture is like several pieces of jigsaw put together without any steel or ferrous materials.ŌĆØ

Reportedly, more than 3,000 craftsmen have involved back at home in India, carving icons and statues with 5000 tons of Italian Carrara Marble. The exteriors will be made of 12,250 tons of pink sandstone.

IndiaŌĆÖs ambassador to UAE Pawan Kapoor and Indian Consul General in Dubai Vipul were also present at the site along with several prominent members of the Indian business community and members of the Community Development Authority (CDA), Dubai and Abu Dhabi.