Udaipur. In a shocking incident, two Muslim men killed a Hindu tailor Kanhaiya Lal in the Maldas Street area of Udaipur, Rajasthan. According to the video shared by the Islamists, they killed the innocent tailor only because his son shared few posts on social media supporting former BJP spokesperson Nupur Sharma.

In the viral video, the accused can be seen talking to Kanhaiya Lal at his shop; soon, when the tailor approached him for his measurement, he attacked him with a knife and stabbed him to death.

Since Kanhaiya Lal’s son made the post on social media, he and his family were receiving death threats. Kanhaiya lal was so much afraid of these threats that he did not open his shop for six days.

He also complained to the police that he and his family members were getting death threats; still, the Udaipur police did not take it seriously. Instead of providing him protection, they asked him to stay low for some days.

The video statement released by the Vishwa Hindu Parishad’s International working president Alok Kumar, on the brutal murder of Kanhaiya Lal said, “Today’s incident from Udaipur has challenged the sovereignty, Unity, liberalism, and secularism of India, they have also threatened our Prime Minister, I am also afraid about Nupur and Naveen as even they are also on the target list of Jihadis” 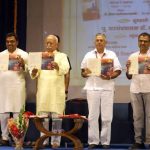