After learning lessons from the failure of the Non-Cooperation movement, Indian National Congress planned a new Nationwide agitation. Gandhiji was to lead this new ‘Savinay Avagya Andolan’. Gandhiji started this new movement on 6th April 1920 by his historic Dandi Yatra. Gandhiji violated the then Salt Act and appealed country men to join the Satyagraha movement by violating this discriminatory act. Result was that an all India Non-violent movement was launched against all arbitrary acts.

How could it had been possible that any step towards freedom struggle would not have been joined by RSS? Young bands of Swayamsevaks started agitations at specific places as directed by Gandhiji. Keeping in mind the enthusiasm and spirit of patriotism of Swayamsevaks, it was decided in a meeting of Sanghchalaks (Sangh leaders) that unconditional support should be given to Gandhiji led movement.

Dr. Hedgewar called upon Swayamsevaks to wholeheartedly join the movement. All Swayamsevaks were required to take permission individually from Sanghchalaks to participate in the movement. Dr. Hedgewar said that the freedom movement did not belong to any leader or party but it was a National cause. Freedom movement must continue till complete independence was achieved. It would not serve any fruitful purpose in the long run if different parties and leaders did not work in unison and under one umbrella. He made it clear that we must accept the leadership of Gandhiji and work under his guidelines leaving aside our differences and different opinions.

Dr. Hedgewar himself decided to go to jail by offering Satyagraha. Those days the government had banned entry into the 1816 sq. Miles. of forest in central province. Nobody was allowed to get fodder for their animals and timber to build their houses from the forest. Result was that animal husbandry and other people dependent on forest produce were suffering. Dr. Hedgewar decided to offer Satyagraha by violating this law.

Before offering Satyagraha, Dr. Hedgewar resigned from his post of Sarsanghchalak and appointed Dr. Pranjpe in his place. At that moment he made it clear that all of them who are taking part in that movement, were doing so in their individual capacity. There was no change in their ideology or the functioning and commitment was the same.

Dr. Hedgewar with thousands of Swayamsevaks in Jail

It was decided to violate forest law on the 24th July. In an open ground Swayamsevaks bowed before Bhagwa Dhawaj (saffron flag), offered prayers and everyone was provided with grass cutting sickle and other implements to cut the wood etc. Place for offering Satyagraha was a village, ten kilometres deep inside the Lohara forest near Yavatmal. More than ten thousand people had gathered to witness the Satyagraha. Shouting slogans of Bharat Mata Ki Jai and Vande Matram, Doctor.ji and his team started cutting trees and grass. All were arrested for breaking the law. Dr. Hedgewar was sentenced to 9 months of rigorous imprisonment while others were sentenced to 4 months of jail. This forest Satyagraha was acknowledged as the most successful Satyagraha of that movement. Congress held a public meeting in support of Dr. Hedgewar to facilitate him.

After hearing about rigorous imprisonment of Doctor ji. Swayamsevaks in large numbers offered Satyagraha at different places and ignited the flame of independence among the masses. Government had banned the books written by Veer Savarkar. Swayamsevaks broke the law by reading loudly from the banned books at public places. Several RSS leaders like Babu Rao Vaidya, Martand Rao Jog, Sita Ramheker, Vithal Rao Gadge participated in Satyagraha and were sentenced to 4 months of jail. Close associates of Doctor ji, Appaji Joshi and Dada Rao Parmarth offered Satyagraha and went to jail with their large teams of Swayamsevaks. It is now difficult to find how many Swayamsevaks participated as all Swayamsevaks worked as Congress workers keeping their Sangh identity in low profile.

Police had crossed all limits of brutality while dealing with agitating Swayamsevaks. Hundreds of them were injured badly. Government did no efforts to treat the injured. Sangh workers on their own started medical service named. ‘Sushurusha Pathak’. More than hundred Swayamsevaks worked to help treat injured Satyagrahis. Dr. Pranjpe offered free services in his private clinic.

Dr. Hedgewar continued to guide Sangh work even while being in jail. There were some Congress prisoners in jail who were against Sangh and were not happy with the growing network of Sangh. But Dr. Hedgewar who was master in interpersonal skills, not only changed their perceptions but moulded them as Swayamsevaks by his friendly approach. Detailed discussion would continue for hours in a very cordial atmosphere about Hindutva, Hindu Rashtra, complete independence etc.

All this resulted in RSS work in jail. All will stand in que and sing prayers in the morning. In one similar prayer meeting Doctor ji gave a speech “We are agitating for our freedom consistently. Brutal suppression by the government shows how afraid they are of freedom fighters. We have to think and analyse the fact that how a handful of foreigners could enslave us. A momentary enthusiasm and excitement are not going to achieve our targets. We have to be consistent and be prepared for a long struggle.”

Dr. Hedgewar was concerned about Sangh work even while in jail. Two prominent Sangh leaders Dr. Pranjpe and Bhau Rao Kulkarni kept apprised Dr. Hedgewar of Sangh affairs. Doctor ji was glad that Sangh work is expanding in his absence and more and more young people are joining Shakhas.

Clarion Call to break the Shackles of Slavery

Every year on the day of Dushehra full uniformed cadre of Swayamsevaks would march through the city/town/streets which was a major attraction for the local people. Seeing these young Swayamsevaks in full dress code parading in unison in tune with rhythms of musical bands, people got confident that they are safe and could be well united. In 1930 Dushehra parade, a letter issued by Doctor ji was read out in all route march programmes. This letter was full of patriotic sentiments and inspired Swayamsevaks to work wholeheartedly for freedom. Letter read like – “Till we break the shackles of slavery we cannot take our Nation to the peak of glory. Till that we have no right to any comforts. Those children are of no use who enjoy physical comforts while their mother is being subjected to pains, disgrace and slavery.’

Dr. Hedgewar was not only a service-oriented leader but an unparalleled patriotic and organising personality. While associating with revolutionaries or on a platform of Congress and in their agitations, and while serving prison sentence, he identified some persons with distinct qualities, reputed persons and young energetic people. He moulded them for Nation building.

On 14th Feb. 1930, Dr. Hedgewar was released from jail. A welcome rally facilitating Doctor ji was organised in Akola and Wardha. Several Congress leaders and workers joined these rallies to welcome Doctor ji. Dr. Hedgewar was facilitated in Hathikhana ground of Nagpur in which Dr. Pranjpe handed over the post of Sarsanghchalak back to Doctor ji. It was an emotionally charged atmosphere as if Lord Ram had returned back from Vanwas exile to Ayodhya and younger brother Bharat who ruled in the name of Lord Ram symbolically represented by his Khadaun (wooden sandals), similarly Dr. Pranjpe handed over the seat of Sarsanghchalak back to Dr. Hedgewar. 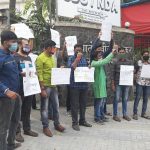