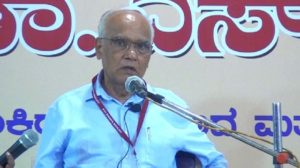 Mysore. Expressing displeasure over the entry of two women in the Sabarimala temple, Veteran Kannada writer S.L. Bhyrappa said that one should not target the religious practices followed by the people.

Speaking to the media after a book launch ceremony, the Kannada Novelist condemned the entry of two women and stated that matter associated with the faith and religious sentiments should not be dragged into the court.

The ace writer opined that several attempts were made to impose a particular ideology when Jawaharlal Nehru assumed the office of the Prime Minister.

The senior Kannada writer also criticized the decision of new English Medium school by the Karnataka government. Underscoring the importance of education in mother tongue, he said: “Kannada is as important as English”.