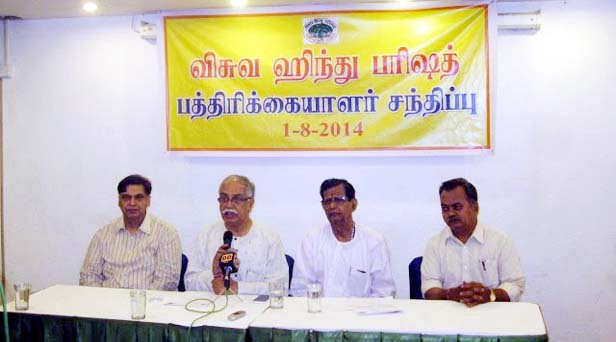 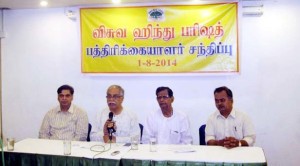 Explaining in detail on the formation and seva activities carried out by VHP, Shri Ashok Chowgule announced that a year-long Golden Jubilee Celebrations will be carried on all over the country commencing from Krishna Janmaashtami Day (August 17, 2014).

Five Major Hindu Convention of Sants, Sadhus will be held at Mumbai, Delhi, Calcutta, Bhopal and Bangalore wherein lakhs of Hindus will be participating.  The inaugural Hindu convention will take place at Chandini Ashram, Mumbai on August 16, 2014.  On August 17th, Shoba Yatra from temple to temple right from wards to districts will be carried out in the State.

Wide range of seva activities like blood donation, plantation of trees etc. will also be carried out during the Convention at various places.

Sri Gopalrathinam, Central Secretary, VHP informed that state-wide celebrations like awareness programmes on Hindu Dharma, women security, Shobha Yatra, Conventions etc. will be conducted. One lakh unit of blood donation on one day by Bajrang Dal volunteers during November will be a highlight during the Golden Year Celebrations. 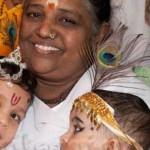