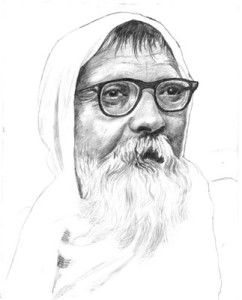 Vinoba stands as a symbol for the struggle of the good against the evil, of spiritual against the mundane. He was a spiritual visionary, whose spirituality had a pragmatic stance with intense concern for the deprived. He was a brilliant scholar who could knowledge accessible to ordinary people. He was Gandhi’s ardent follower, who could retain originality in thinking. As S. Radhakrishnan pointed out, “Indeed his life represents harmonious blend of learning, spiritual perception and compassion for the lowly and the lost.” His Bhoodan (Gift of the Land) movement started on April 18, 1951, he attracted the attention of the world. Untouched by publicity and attention, Vinoba had continued his efforts for a just and equitable society. In fact, his life is a saga of his commitment to nonviolent ways of bringing change, his yearning for the highest level of spirituality and his unwavering faith in human values and love.

Vinoba was born in a Brahmin family on September 11, 1895 at the village of Gagoda in Kolaba district of Maharashtra. He was named Vinayak at birth and was influenced by his mother Rukmini Devi, a religious woman. His younger brother, Balkoba Shivaji, remained unmarried and adopted a life of renunciation and service to humanity like him.

Vinoba, well-read in the writings of Maharashtra’s saints and philosophers at a young age and deeply interested in Mathematics, was attracted to the core of learning. Naturally, the routine course-work was not enough to quench his thirst for knowledge. His two years in the college remained full of internal uneasiness and agitation. Early in 1916, he put his school and college certificate in a fire on his way to Mumbai in March 1916 to appear for the intermediate examination. He took a fateful decision not to reach Mumbai, but to reach Varanasi (also called Kashi, then called Benaras). This decision was motivated by his longing to attain the imperishable and all pervading Brahma. He got into the study of ancient Sanskrit test.

The report in the newspapers about Gandhi’s speech at the newly founded Benaras Hindu University attracted Vinoba’s attention. He wrote a letter to Gandhi. After an exchange of letters, Gandhi advised Vinoba to come for a personal meeting at Kochrab Ashram in Ahmedabad.

Vinoba went and met Gandhi on June 7, 1916. This meeting changed the course of Vinoba’s life. He had said later “When I was in Kashi, my main ambition was to go to the Himalayas. Also there was an inner longing to visit Bengal. But neither of the two dreams could realise. Providence took me to Gandhi and I found in him not only the peace of the Himalayas but also the burning fervor of resolution, typical of Bengal. I said to myself that both of my desires had been fulfilled. Over the years, the bond between Vinoba and Gandhi grew stronger. Vinoba participated with keen interest in the activities at Gandhi’s ashram, like teaching, studying, spinning and improving the life of the community.

Asked by Gandhi to take charge of the ashram at Wardha, Vinoba went to Wardha on April 8, 1921. In 1923, he brought out `Maharashtra Dharma’, a monthly in Marathi (regional language), which had his essays on the Upanishads. Later on, this monthly became a weekly and continued for three years. His articles on the Abhangas of Sant Tukaram (a saint poet) published in it became popular. A time passed Vinoba continued his search for the self which task him to spiritual heights. His involvement with Gandhi’s constructive programmes related to Khadi, village industries, new education (Nai Talim), sanitation and hygiene also kept on increasing.

In December 23, 1932, he shifted to Nalwadi (a village about two miles from Wardha town), from where he experimented his idea of supporting himself by spinning alone. Later, when he was sick in 1938, he shifted to what he called Paramdham Ashram in Paunar, which remained his headquarters.

Vinoba’s involvement in the freedom movement during this period remained. In 1923, he was jailed for months at Nagda jail and Akola jail for taking a prominent part in the flag satyagraha at Nagpur. In 1925, he was sent by Gandhi to Vykon (in Kerala) to supervise the entry of the Harijans to the temple. In 1932, he was jailed for six months to Dhulia for raising his voice against the British rule. In 1940, he was selected by Gandhi as the first individual satyagrahi. He was jailed thrice during 1940-41 for individual satyagraha at Nagpur jails; first time for three months, second time for six months and third time for one year. Vinoba was not known nationally when Gandhi selected him for individual satyagraha. Gandhi had issued a statement on October 5, 1940 introducing Vinoba. It was stated there that “Vinoba believes in the necessity of the political independence of India. He is an accurate student of history. But he believes that real independence of the villagers is impossible without the constructive programme of which khadi is the centre.” Vinoba took part in the Quit India movement of 1942 for which he got an imprisonment of three years at Vellore and Seoni jails.

The jails for Vinoba had become the places of reading and writing. He saw the proofs of his book `Gitai’ (Marathi translation of Gita) in the Dhulia jail. Lectures given by him on Gita to the colleagues in the Dhulia jail collected by Sane Guruji were later published as a book. Writing of the book “Swarajya Shastra” (the treatise of self rule) and the collection of the bhajans (religious songs) of the saint Gyaneshwar, Eknath and Namdev were completed. In Nagpur jail, `Ishavasyavritti’ and `Sthitaprajna Darshan’ were written in the Seoni jail. Four languages of the South India were learnt by Vinoba at Vellore jail and the script of Lok Nagari was also created here after research. His writings covering diverse areas of religion, philosophy, education and Sarvi are thought provoking and yet accessible to the common people. The popularity of his writings has proved his ability to relate to the people. The competence of this multi-lingual scholar as an editor was also of high order as displayed by his editing of `Maharashtra Dharma’ (mentioned earlier), Sarvodaya(in Hindi) and Sevak(in Marathi).

In March 1948, Gandhi’s followers and constructive workers met at Sevagram. The idea of Sarvodaya Samaj (society) surfaced and started getting acceptance. Vinoba got busy with activities which would sooth the wounds of the partition of the nation. In the beginning of 1950, he launched the programme of kanchan-mukti (freedom from dependence on gold, i.e. money) and Rishi-Kheti (cultivation without the use of bullocks as was practised by Rishis, i.e. the sages of ancient times). In April 1951, after attending the Sarvodaya conference at Shivnampalli, he started his peace-trek on foot through the violence-torn region of Telangana(now in Andhra Pradesh). The disturbances were caused by the communists. On April 18, 1951, his meeting with the villagers at Pochampalli opened a new chapter in the history of non-violent struggle. The Harijans of the village told him that they needed 80 acres of land to make a living. Referring to this, Vinoba asked the villagers if they could do something to solve this problem. To everybody’s surprise, Ram Chandra Reddy, a landlord, got up and showed his willingess to give 100 acres of land. This incident, unplanned and unheard, showed a way to solve the problem of the landless. The Bhoodan(Gift of the Land)movement was launched.

The response to the movement was spontaneous. In Telangana, the gift of land averaged 200 acres of land per day. On the journey from Pavnar to Delhi, the average gift was 300 acres a day. Vinoba had put five crore acre as the target. While walking in Uttar Pradesh in May 1952, Vinoba received the gift of the whole village of Mangrath. This meant the people were prepared to all their land for the benefit of all the villagers, not as individual bhoodan, but as community Gramdan (Gift of the Village). Vinoba received 23 lakh of land in Bihar, while walking from September 1952 to December 1954. Orissa, Tamil Nadu and Kerala contributed significantly to Gramdan. Vinoba firmly believed that, “We must establish the independent power of the people – this is to say, we must demonstrate a power opposed to the power of violence and other than the power to punish. The people are our God.” Connected with Bhoodan and Gramdan, there were other programs. Important of these were Sampatti-Dan (Gift of the Wealth), Shramdan (Gift of the Labour), Shanti Sena (Army for Peace), Sarvodaya-Patra (the pot where every household gives daily handful of grain) and Jeevandan (Gift of Life). Jayprakash Narayan in 1954 gave the gift of his life. Vinoba acknowledged it by giving the gift of his life.

Vinoba knew the strength of the padayatra (march on foot). He walked for 13 years throughout India. He had left Paunar on September 12, 1951 and returned on April 10, 1964. He started his Toofan Yatra (journey with the speed of high-velocity wind), using a vehicle, in Bihar in July 1965, which lasted for almost four years. He covered thousands of miles, addressed thousands of meetings and mobilized the people cutting the barriers of caste, class, language and religion. Some dacoits from the notorious Chambal Valley (a hideout of dacoits in the northern India) surrendered themselves to Vinoba in May 1960. For Vinoba, it was a victory of nonviolence.

On June 7, 1966, 50 years after his meeting with Gandhi, Vinoba announced that he was feeling a strong urge to free himself from outer visible activities and enter inward hidden form of spiritual action. After traveling through India, he returned to Paunar on November 2, 1969 and on October 7, 1970, he announced his decision to stay in one place. He observed a year of silence from December 25, 1974 to December 25, 1975. In 1976, he undertook a fast to stop the slaughter of cows. His spiritual pursuits intensified as he withdrew from the activities. He breathed his last on November 15, 1982 at this ashram.

Vinoba’s contribution to the history of nonviolent movement remains significant. It has to be admitted, however, that the achievement of Bhoodan – Gramdan movement in the material terms was much below the expected target. According to an estimate in total 41,94,270acres was obtained, and the land actual distributed according to 1975 statistics was 12,85,738 acres. 18,57,398 acres was found unfit for distribution. Some of the remaining land got entangled in legal hassles and some was deserved to be written off. As against it has to be noted that Vinoba’s movement rekindled faith in non-violence and human values advocated by Gandhi. It presented an alternative to violence and a vision of non-violent society. It raised important questions regarding inequality prevalent in the society. Vinoba saw the land as the gift of God like air, water, sky and sunshine. He connected science with spirituality and the autonomous village with the world movement. He regarded the power of the people superior than power of the state. Many of his ideas remain relevant and inspiring in the strife-ridden modern times.